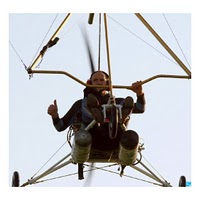 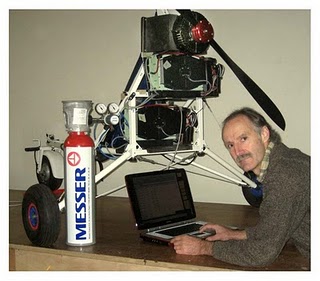 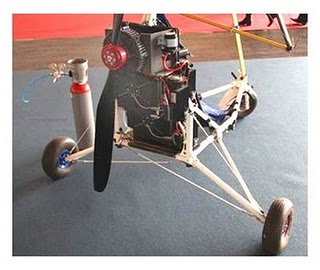 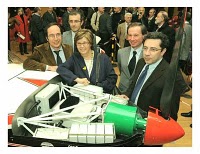 French hang glider pilot and light sport innovator/entrepreneur G©rard Thevenot has been a visionary all his life.  I’ve profiled him previously re his efforts to create alternative-powered sport aircraft. *** He’s been testing electric trikes for Yuneec, the China company that’s developing several commercial sky-breaking electric aircraft designs.  *** And last fall he set an electric trike record for sustained power flight of 1 hour 16 min. *** Today comes word from Aero 2010 International Exhibition for General Aviation, the big European airshow, that Thevenot has been awarded the 2010 E-Flight Award for his hydrogen fuel cell-powered trike. *** His trike is one of three fuel-cell powered aircraft exhibiting at this year’s Aero show. *** A fuel cell is a power source that creates enough electricity to drive an electric motor, using, in Thevenot’s case, only hydrogen fuel and oxygen.  *** The exhaust components? Heat…and water vapor! *** Fuel cells operate at low temperatures too: under 200 degrees F. *** And there is no battery or accumulator, just the fuel cell itself. *** The 77 lb. wing’s wingspan is 39 feet.  The 7 kW-generating motor weighs just 121 lbs, including the 1.25 gallon hydrogen tank. *** Trike (hang glider plus three-wheeled buggy), fuel cell and the single pilot (Thevenot) all weigh less than 285 lbs.   “This allows it to fly,” Thevenot told Aero’s reporters, “powered only by the fuel cell and without the assistance of an auxiliary battery.” *** Boeing flew a fuel cell powered GA-style aircraft for 20 minutes in 2008.  Thevenot has flown his fuel cell trike more than an hour, including across the English Channel in 2009. *** I’ve not been able to find out yet whether that hour represents a full tank’s worth of hydrogen or just what he’stested so far…because in 2006, Thevenot’s fuel cell-powered car won the Shell Eco Marathon with a hydrogen supply corresponding to one quart of gasoline – which went a world record distance of almost 2500 miles!  You read right: that’s mileage equivalent to 10,000 miles per gallon! *** “Oh honey, did you remember to fill up the car last January?” *** Of course, hydrogen is ridiculously expensive.  This is R&D time, not almost-ready-for-prime time. Likewise, for those who think “Hindenberg!” whenever the word hydrogen pops up – which is all of us, right? – there are many technologies including solid state oxice forms of hydrogen and other fuels being explored, not just hydrogen gas. *** Meanwhile, congratulations to Monsieur Thevenot for his vision and execution so far. *** Two other ongoing fuel cell-powered electric projects to follow: Hydrogenius, from the University of Stuttgart and Skyspark, which flew a GA-style airplane at 150 knots recently. *** While a trike may seem more trivial stunt than practical application in our age of private jets, $500K GA cruisers and $100,000 LSA, that’s exactly the point: first, we show the vision, then we figure out how to upscale to the market.  *** For a good discussion of this topic as it relates to growing aviation in general, see Chris Finley’s excellent discourse here. *** This is what pioneer days look like: forward-thinking people doing their thing, and one day we all wake up and the world’s changed.  *** Remember Wozniak and Jobs (Apple Computer, started in a garage 30 years ago), Yuneec (which made its fortune making electric motors and accessories for model airplanes) and…well, the Wright Brothers, who quietly pursued their vision in the winds of Kitty Hawk, while the world went on it’s merry way convinced man would never fly. *** SIDE NOTE: A good site to keep track of: The E-Flight Expo, which shows at the Aero Expo and explores alternative power and solutions to the global challenge of internal combustion engines. *** isn’t this a great time to be alive? *** —photos courtesy Aero Expo and Willi Tacke