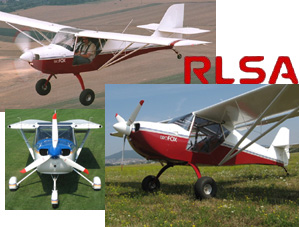 Many pilots love the look of taildraggers; EuroFox now offers that configuration. Pilots also like folding wings. Over 235 EuroFox models have been built since 1990. Distributor-direct marketing keeps the price low at $59,590 (in mid-2007). More info?

EuroFox has remained one of the value price leaders among all 57 LSA models. Now, U.S. importer, Rollison Light Sport Aircraft announced that a taildragger version is available. Many experienced aviators feel a taildragger looks faster and has a more appealing appearance (though experience flying a taildragger is a plus). RLSA expressed, “EuroFox is ideal for recreational flying, but it is also a good touring aircraft within the LSA category and has a range of 600+ miles, a cruise speed up to 120 mph, and a climb rate of over 1,000 fpm with the 100 hp engine.” The taildragger version of the EuroFox has been available in Europe for several years. The 2007 version features a redesigned main landing gear of composite materials and has widely-spaced main wheels to improve crosswind characteristics and ground handling. To help you visit more airfields RLSA said, “The EuroFox taildragger features a new toe brake system and larger, heavy-duty tires.”