Cheetah’s dual throttles are mounted on the end of the door-side armrest. 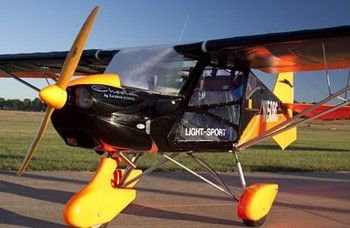 One of the lesser-known S-LSA I caught up with at the Midwest EXPO was the Rainbow Aircraft Cheetah XLS. It’s an ultralight-style LSA — tube and ripstop Trilam fabric envelopes that are pre-sewn, pulled over the airframe components and laced up for tightness — with a rakish look and some rather unique features such as its dual throttles each folding out of the way with the armrest. *** For those of us challenged by aviation budget considerations, the price of $53,000 ready to fly is certainly a draw and makes it nearly the least expensive three-axis, traditional planform SLSA (lower-yet models include the CGS Hawk or the open-cockpit M-Squared Breese). You could choose weight-shift control trikes and powered parachutes for less greenbacks, but the Cheetah is one of the lowest cost fixed wing LSA on the U.S. market. *** The company that imports the Cheetah, Midwest Sport Aviation, was founded by three brothers who grew up going to the nearby Oshkosh airshows with their dad, a commercial-rated pilot. *** The jazzy looking airplane is an import — from South Africa — and has a lot to offer for pilots looking for an entry-level LSA with lots of nice features. *** Although you might be tempted to think of the Cheetah as more of a local flyer, it’s far from incapable of XC flights. Cruise at 65% power is 95 to 105 mph depending on engine choice, which ranges from an 85-hp Jabiru 2200 to two Rotax models (65-hp and 100-hp). *** My flight impression of the Cheetah? Pleasantly surprised. It’s responsive and lighter on the controls than I expected of a laced-envelope airplane. It doesn’t have the same solid “airplaney” control feel as the Rans S6-ELS but I thought it coordinated with less effort than the X-Air LS — and it’s priced somewhat less than either. *** The fuel storage of nearly 25 gallons is a bit of a throwback to the early ultralight days: it’s all carried in one fuselage tank behind the seats. *** Gross weight of 1,245 pounds still allows a 628-pound useful load, or upwards of 477 pounds with a full tank. That’s a payload a lot of heavier SLSA would be happy to own. *** My report on the Cheetah will run in Plane & Pilot soon. So, I put it through some cranking and banking with company co-owner Jon Syvertson and here’s the short tell: it’s a well-built and cleverly outfitted airplane with good performance and nice handling. *** Visibility is very good; the low overhead skylight gives a good look ahead even in medium banked turns. *** It’s comfortable, easy to fly, readily climbs out at up to 1,200 fpm depending on engine size and is easy to ground handle thanks to the steerable nosewheel. It also sports full dual controls and four-point harnesses. *** All told, Cheetah XLS is a feature-packed airplane that gives you a real price option.