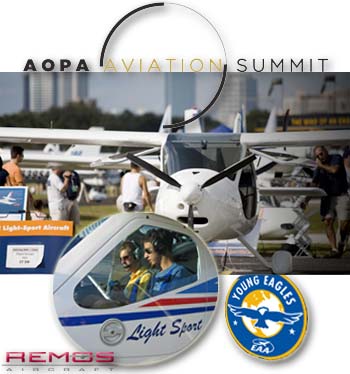 Reaching Out with LSA — According to EAA’s Bob Campbell, 292 students had their first flying experience in a Remos G-3 or GX during EAA summer camps. Four CFIs rotated the students through a series of 15- to 20-minute flights. (At AOPA’s Summit home page, the first aircraft you see is an LSA. No wonder, perhaps, as the organization said their many incoming calls are more often about LSA than any other topic.)

We all discuss declining numbers of pilots in FAA’s database. Despite widespread concerns, efforts to bring more people into aviation have fallen short. *** Several worthy projects have attempted to reverse the drop in the pilot population. Over the years, EAA’s Young Eagles program has put nearly a million and a half kids into airplanes. That’s a wonderful achievement, thanks to EAA’s leadership and many thousands of willing volunteer pilots. One LSA provider, Remos, has worked with the organization to provide flights to a large flock of kids attending EAA summer flying camps (photo). *** Yet we must do more to interest people in flying. Along those lines, I’m at once amazed and appreciative that AOPA and EAA have chosen to combine efforts (finally!). AOPA is also completely refashioning its former Expo into the new AOPA Aviation Summit. “For the first time, AOPA will be reaching outside the aviation community to welcome the public into all general aviation has to offer.” AOPA’s new initiative, combined with a new collaboration with EAA, joined to entry-level Light-Sport Aircraft looks like a winner to me. *** For the fifth year in a row, LAMA will work with AOPA event planners to provide an LSA Area at the airport display, which itself will focus on more public outreach this year. One neat new addition: seaplanes, including LSA, flying from a pier right next to Peter O. Knight airport in Tampa, Florida.