Happening right now as this is written …a young pilot, with impressive support from his father and sister, is flying to Oshkosh. Have you ever done it? 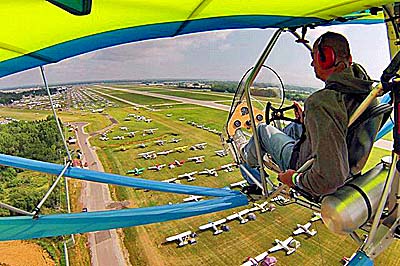 I’ve frequently had the pleasure to fly into KOSH during the show. Every time, it’s been an eye opening experience, literally and figuratively. See this article describing one such experience.

Now, imagine making such an epic arrival in an ultralight aircraft… ‘er vehicle, cruising at 40-50 mph. Of course, a Part 103 ultralight means flying solo, so you do your own head-swiveling to look for traffic. Your planning better be solid to make this a reasonable task.

Go even further and imagine doing all this while you are 14 years old! Sound crazy? Yeah, it might seem that way but in an hour-long conversation with father William Scott, I came to admire the preparation for son Henry Scott‘s flight.

At 14 years old Henry has already flown the Oshkosh ultralight pattern a year ago, at age 13, using his foot-launched powered paraglider (PPG). Are you starting to get the idea that this young aviator may be capable and well-schooled to safely make such a flight, of course, backed up by direct support and relying the experienced judgement of his father, a pilot of a Commander GA airplane?

Here’s an amazing observation: Henry has never known a time when we did not have Light-Sport Aircraft. Like young folks who have known about iPhones their entire life, LSA have existed since before Henry was born. (After reading this, if you are feeling rather old, well… I hear you.)

At age nine, visiting with Dad, Henry asked, “Could I fly [into Oshkosh]?” That question alone puts Henry in a class of his own. Most kids that age are playing with dinosaur toys, not asking about flying into the world’s busiest airport. 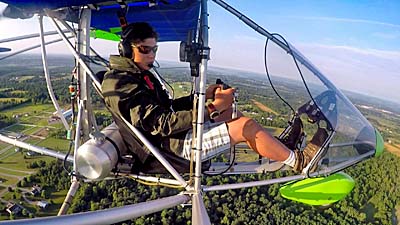 Henry Scott in flight in his Aerolite 103.

So, in 2019 commenced a major cross country flight of some 720 miles from Warrenton, Virginia to Oshkosh, Wisconsin. This took a whole series of short legs because any true Part 103 ultralight may only carry five gallons of gas, or something over an hour of flight with a reserve. A map shows a path over the Appalachian mountains and midwestern farm land. With average flight segments of 45 minutes, lots of landing were involved.

“We used a methodical process,” remembered William. “I didn’t want my son to be hurt and aviation can be merciless.”

William and Henry started with a powered paraglider when the lad was only 10 years old. He soloed at 11 after bringing in an expert from Florida to assure he really had the right stuff. Dad William is an experienced GA pilot but knew little of PPGs. 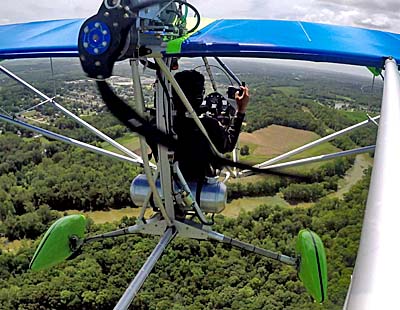 At Henry’s age 13, the Scotts ordered an Aerolite. This followed many flights in a Cessna 150 with his father, where he learned all the basics of flight while someone was ready to assist when (and if) needed. However, at his youthful age and unable to obtain a Private Pilot certificate, Henry could not solo the C-150.

“We chose the Aerolite 103 because it looked like an airplane,” explained William. “It was confidence inspiring. It had airplane features I was familiar with, such as flaps.” Yet, he humorously added, “It’s an anodized aluminum chair.”

For readers that may not know, Part 103 is a very special regulation dating to 1982. The entire rule can be printed on the front and back of a single piece of paper making it aviation’s most charming rule, in my opinion. No pilot certificate is required. No aircraft registration is required. No medical of any kind is needed. Plus, a Part 103 aircraft can be delivered fully ready to fly.

For most pilots, a 700-mile cross country would be a good voyage. Commonly, though, they would complete the trip with two or three stops. As you can see from the map and read below, Henry had to plan approaches and landings many times while dad and sister raced along in the ground chase vehicle.

Detail of the Aerolite 103 by talented artist Rich Jennings.

Despite their close eye on Mother Nature, Henry got completely doused as he flew in rain at one point (he had no other problems). As you might expect at this point in the story, a wet Henry remained undaunted. 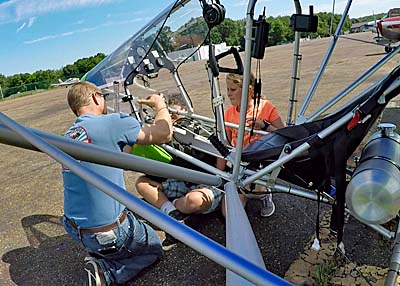 Minor repair to nosewheel steering linkage shows this is a family affair.

“Typically he flew at about 1,000 feet AGL,” said William. “The Appalachians were more challenging with up and down drafts. We prepared for this by going to Colorado in the Commander and taking a mountain flying course, learning about anabatic and katabatic (upslope and downslope) air movements.” This prepared Henry to use lift when it was available and to learn the hazards of sinking air in such terrain.

Each day involved about four hours of flying. Father and son planned 28 legs over seven days assuming some days lost due to weather. Each segment covered about 35 miles. “Forty miles is possible with a safety reserve, but we proceeded with caution.”

Even for those of us with a lifetime of flying in our logbooks, I’m not sure how you top the experience Henry is gaining as this is written. Good for Henry and good for dad and sis’ for supporting their son and brother en route to aviation’s summer celebration of flight!

UPDATE: As I finished writing this article, William texted me, “He’s on final for 36!” Hurray for the Scotts! 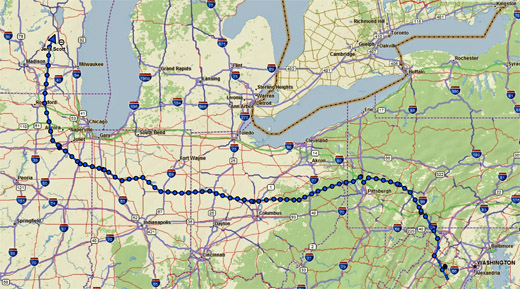