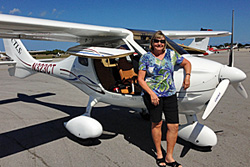 My wife Randee poses by our Florida Keys LSA. 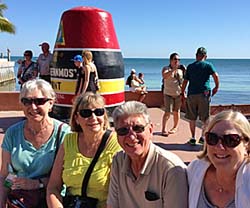 My four traveling companions each took a flight segment to and from the Florida keys. All enjoyed touring by air. They sit in front of the southernmost point in the USA. 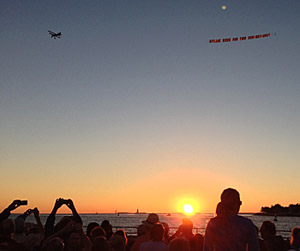 Sunset in Key West draws a crowd every day, many of whom held their smartphones high for a photo. Note the biplane towing a banner promoting rides. 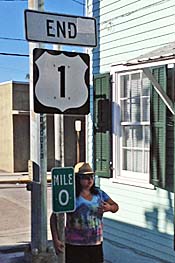 Key West is the end of the line for U.S. Highway 1 that runs 2,400 miles on America’s East Coast.

This last weekend I did something I’ve never done before. It worked much better than I expected and I want to pass along the idea for others to consider. It won’t always work but it could help introduce more people to the pleasure of flying. Four friends and I took a trip from my home near Daytona Beach, Florida to the Florida Keys with a stay in Marathon Key plus ground and aerial tours of Key West. This trip was some time in planning; I referred to it as a fly/drive vacation. We used the long weekend trip to celebrate a special birthday. You can likely interpret what “fly/drive” means quite easily but let me put some detail to the story.

For the flight I used a four-partner-owned Flight Design CTLSi so the first step was to schedule the plane with the owners. No problem as we were leaving Friday and would return Monday. This particular LSA is not used for flight instruction so it was easy enough to reserve the time. Since five people were traveling, even a trip by, let’s say, a Cessna 172 or 182 could not have carried everyone. We also needed a way to get around once we arrived in the Keys. Sure, we could have rented a car but transporting what everyone wanted to bring might not have fit in a four seater. In a LSA, of course, we had only two seats but in some ways this was perfect. The direct, nonstop flight time would have been 2.5 hours (versus 7-8 hours driving) but for many non-pilots, even the shorter trip is a rather long time to be in an airplane, especially if it’s a little bumpy. (It was quite pleasant flying but smooth air is hard to predict.)

I planned the trip down to Marathon (about 30 minutes shy of going all the way to Key West) to have four stopping points. All airports — Vero Beach, Lantana, Tamiami, and the destination of Marathon — were picked to make equal flight segments. I also wanted each airport to be close to the road the car would travel. Each waypoint was convenient, though we pilots often forget how challenging it can be to find a specific place on an airport if you drive. An airline terminal may be well marked on the road, however, smaller airports can be a puzzle to find such-and-so FBO … and for that matter, “What’s an FBO?” … “It’s a Fixed Base Operator.” … “What’s that?” See the problem? Since the airplane always arrived ahead of the car, my segment passenger and I would go into the FBO or other facility and get a physical address, which we would text to the car. It proved a workable solution.

Each person got one leg down and a different leg back, and I can tell you that each of them enjoyed it immensely. This may be no surprise to pilots, but remember, most people never see their destination from the air except maybe out an airliner window for a few minutes, if that. As we pilots know, a destination, or the travel route, looks remarkably different from the air and offers a perspective the vast majority of the population never sees. I took Saturday off from flying and on Sunday did four one-hour air tours from Marathon around Key West and back. The Navy base and Key West International were wonderfully accommodating. Each passenger saw the islands at different times of day and snapped plenty of photos. Since each got a unique view, we’re looking forward to another session where we all put our photos up on a big screen TV. We plan to share photos among us so each has a complete set (thank goodness for the ease of trading digital photos).

The LSA burned fewer gallons of fuel than the automobile and each passenger enjoyed getting out of the car for one of the four legs each way. LSA are also great viewing platforms with broad visibility and most are roomy so no one felt cramped. The fly/drive trip was such a hit that we plan a repeat soon and may do several over the months and years ahead. None of my passengers are likely to take up flying nor buy an aircraft. Yet they will assuredly tell their friends about the unique mode of travel they experienced. Others who witness their feeling of excitement may become interested in flying. I didn’t plan this as a means of showcasing the wonder and efficiency of flight but that was the result nonetheless. You can bet these four friends will each tell several more friends about how cool it was to go by LSA and those stories will also be passed along. I think that’s worthwhile. Of course, I was happy to log 11.5 hours of flying after carefully checking weather and aircraft as I sought to ensure a positive experience for all. I encourage you to try it sometime … just plan well and see to your passenger’s comfort and safety.

Take a short tour of the Miami skyline by LSA. ATC put us at 500 feet AGL, below the tops of some buildings but the reliable Rotax 912iS never missed a beat. The hotel at the end is the famous Breakers seen in several movies. Enjoy: