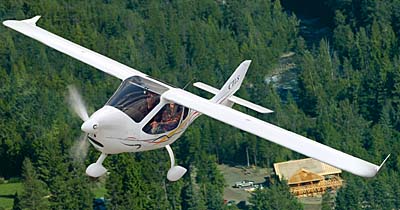 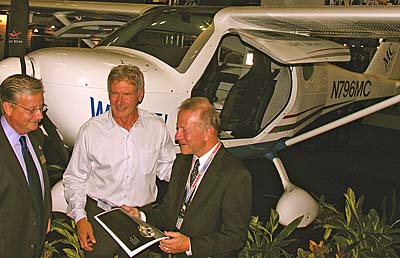 Jack Pelton, actor Harrison Ford, and Tom Poberezny prepare for remarks at an NBAA event with the EAA sweepstakes MC as a backdrop. 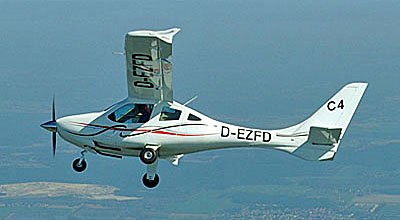 Flight Design’s four seat C4 made its first flight in 2015. 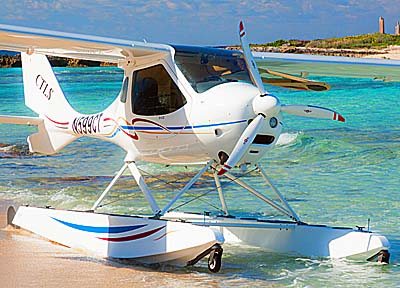 Breaking News … Recently Flight Design in Germany sent a letter to their dealers including this statement, “We have applied for a planned receivership which allows for reorganization of the company.” What does this mean?

Parlaying their prowess in aircraft design, testing, and certification, Flight Design engineered an all-metal version of their carbon fiber CTLS, called MC, plus a four-seat certified aircraft design named C4, among other projects.

That may sound positive, but engineering-intensive projects require costlier talent and can consume boatloads of money. Several projects were started years ago and were underway as the global economy took a sharp turn for the worse in 2009. With funds stretched, serial production of existing products slowed. Something had to give.

Faced with a “liquidity crunch,” Flight Design GmbH filed for insolvency on February 11th. A local German court provided Knut Rebholz, an attorney with experience in restructuring, to be interim receiver of the German corporation. After his assessment, court appointee Robholz reported, “The order situation of the company is good and the products have a very good international reputation in the market.” He continued, “[The] most urgent task to enable intensive negotiations to fund operations.”

The problems faced by Flight Design in Germany slowed aircraft deliveries motivating Connecticut-based Flight Design USA to recently announce a new source of supply for their CLTSi models from a properly licensed and very capable builder.

AeroJones Aviation is headquartered in Taichung, Taiwan, often referred to as the “Silicon Valley” of Taiwan. AeroJones negotiated and signed an exclusive agreement to license Flight Design products. The program to begin production called for the Taiwanese company to assemble new production tooling and equipment including a five-axis CNC machine, water and Laser cutters, TIG welding, composite layup and post-cure ovens, plus a modern paint booth. AeroJones also obtained production worker training, received training to provide quality management, and gradually built up to finished airplanes, which first occurred in 2014. AeroJones’ production facility has passed numerous audits including earning a Production Certificate from China’s CAAC at the end of 2015.

This is not a new, small start-up company but instead one with impressive credentials. AeroJones’ parent company, GSEO (Genius Electro Optical), is a manufacturer and supplier for industrial LED products and laminated lenses for many popular smartphones; it has around 20,000 employees.

AeroJones has been building CTLSi aircraft and shipments to the USA are already scheduled. This will allow Flight Design USA to move forward with its business while the German company works to restructure.

Flight Design USA noted, “Roughly 35% of a CTLS presently comes from the USA — wheels, tires, brakes, radios, antennas, GPS, autopilot, EFIS and EMS systems, intercom, Whelen lights, BRS parachute, ELT, headsets, and miscellaneous parts like the gascolator.” Tom Peghiny continued, “The Austrian-made Rotax engine, propeller, composite materials, windshield and windows, paint, seats, and numerous other parts come from Europe. The planes made by AeroJones Aviation should correctly be called ‘world aircraft’ (just like Boeing and Airbus) as only about 25% will be of non-western origin.”

All these steps — Flight Design in Germany reorganizing, Flight Design USA arranging a new, second source for completed airframes, solidifying components from all over the globe, and preparing for a refreshed American operation — lead to their newest product announcement: the CTLSi “2020” Edition.

“For 2016 we wanted to do a light upgrade to the avionics on the CTLSi centered around dual Dynon SkyView and the Garmin 796,” said Peghiny. “We asked what would we want in addition if we were the customer?”

“Working closely with John Hurst, the technical and sales director of Americana Aviation [a Flight Design USA distributor], we came up with a package we think is very appealing.”

“Since 2012, we have been delivering the Dynon SkyView SV-261 Extended Squitter (ES) transponder — which sends additional info for ADS-B out use. In conjunction with the new Dynon SV-2020 GPS source, this provides an FAA Next Gen-compliant ADS-B out solution,” added Tom.• Many LSA have ADS-B in today but FAA requires the extra “out” data by 2020, which suggested the new CTLSi edition name Flight Design USA chose.

“For ADS-B in we are offering three options,” said Tom. “Customers can choose the Dynon SV-470 ADS-B in, which has the NEXRAD weather in the cockpit, UAT traffic displayed on the screens in vertical and horizontal position and TAFs and TFRs. Alternatively, the Garmin GDL-39-3D offers both 978 UAT traffic and 1020 ES traffic, Bluetooth connectivity to other devices, and a backup ADAHRs-like panel displayed on the Garmin 796. The third option is to have a mini iPad in an AirGizmo panel mount with a USB power supply and choose the ADS-B in software such as Garmin Pilot or ForeFlight. The 2020 Edition will come with the Dynon WiFi adapters installed which also allows loading flight plans into the Dynon mapping software.”

“All this refers to just the ADS-B,” noted Tom. “Of course the CTLSi 2020 also comes with the Rotax 912is fuel injected engine, the Dynon SkyView autopilot, standard airframe parachute, and all the other creature comforts that Flight Design owners have always enjoyed.”

While the Germany company moves to restructure, it is good to see the American LSA fleet leader showing refreshed activity and many interested pilots will look forward to examining a new AeroJones-produced CTLSi at summer airshows.

• Peghiny added, “The good news is that many existing LSA using appropriate Dynon hardware can meet the ADS-B 2020 requirements quickly and with less expense.