People here at Sun ‘n Fun have been asking questions about Flight Design as the company has no exhibitor presence. However, the popular CTLS can be seen at the AeroJones Americas space. Why is this the case? On duty at Aero, reporter (and publisher of Powered Sport Flying magazine) Roy Beisswenger provided the following report. —DJ

At the press conference for Flight Design president Matthias Betsch began the presentation explaining the company’s current situation. As many who follow the industry know, Flight Design has had their share of financial problems. The company is operating more or less as usual, but is in court-ordered receivership. That  means many decisions the company makes need to be approved by the receiver. Fortunately, the situation is reportedly more stable than some speculate.

Official and creditors want the business to remain viable by producing, selling, and supporting primary products. However, projects in development may not always survive scrutiny. Flight Designs’ four-seat C4 project has been put on hold.

That is what makes the introduction of the KLA-100 that much more interesting. This low wing airplane is being shown here at the Flight Design booth right along with the more familiar CT design. Flight Design USA president Tom Peghiny (photo) explained the project. 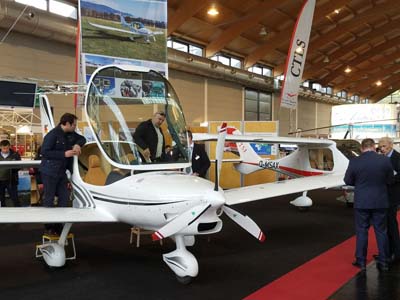 The KLA-100 is a cooperative venture with a company called Vessel Co. Ltd. of South Korea. The government of that country is funding part of the project in order to learn more about the certification process. The project is jointly engineered resulting in construction of two prototypes. One is in Germany and seen at Aero; the other is in South Korea. Two more prototypes are scheduled to be built this year in anticipation of getting the product to market by the end of 2017.

Tom is acting as Head of Flight Test within the Flight Design organization,  a position that carries authority from the German government. For those familiar with FAA designees like Designated Airworthiness Representatives, it is a similar situation, the difference being that companies get the designation instead of individuals. Still, audits and interviews are involved before someone can fill the official position. Tom has long experience. In addition to many years in the aircraft building business, he was the first chairman of the key ASTM Design and Performance Committee that wrote the standards used by all Special LSA producers.

Tom went over some of the design features of the all-carbon-fiber airplane. In particular, the wing is a high aspect ratio airfoil (8.8:1) with a significant laminar flow, NASA-inspired Stall-Safe leading edge on the outer wings for spin resistance, and unique blended winglets to improve climb and cruise.

The cabin is spacious and features a Garmin avionics suite. It is built around dual Garmin G3X EFIS and EMS screens combined with a Garmin GTN-650 MFD, Garmin GTX-335 Mode ES ADS-B out transponder and optional Garmin 2 axis autopilot.

The aircraft you see in the images has already flown seven flights and is doing well in testing. The price is forecast to be around $160,000.