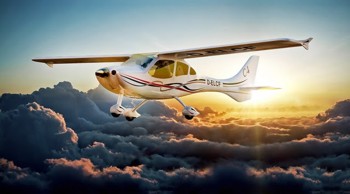 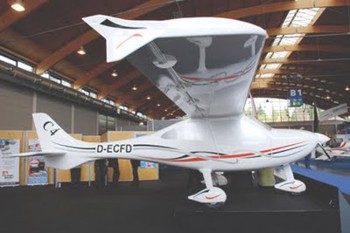 Although this isn’t an LSA story per se, it comes out of Flight Design, the top-notch, top-selling LSA company in America, so I thought you’d be interested to know the company debuted its C4 4-seater at Aero last month and just came out today with some pricing and delivery numbers along with some specs. *** Perhaps the most interesting number to me is the $250,000 “target” price for the American market, along with a €220.000 price for Europe and the rest of the world outside the U.S. *** When’s the last time we saw a new, state-of-the-art 4-seat airplane at a price close to that? *** Also noteworthy is the minimal disparity between the overseas and U.S. prices, reflecting the company’s desire to minimize (yea verily, to almost negate!) the currently soaring euro/dollar exchange rate imbalance. *** Some interesting details about the all-carbon fiber composite airplane: • Engine choice: two engine options to best suit fuel availability and cost in the owner’s region: either a traditional aviation engine that can run on auto fuel, or a turbo diesel engine that burns Jet A fuel. Actual engine brands have yet to be finalized. • Avionics suppliers are still being firmed up as well. • First Delivery: Set for 2013 • Early Bird Buyers: At Aero, more than 30 C4 orders were taken. Orders and deposits are now accepted online or through Flight Design’s worldwide network of dealers. ••• Specifications: (subject to flight test confirmations) include useful load of 1,320 lbs.; • maximum take-off weight of 1.200 kilograms (2,640 pounds); • max cruise of 160 knots @ 6,000 feet MSL. • Range of 1,200 nautical miles with the avgas engine at 65% power or… • 1,700 nautical miles with the diesel engine at 55% power; • Fuel capacity: 70 gal. • Cockpit dimensions: 52″ wide, 47″ at rear seat, head clearance in rear for a 6 foot 7 inch passenger.Matthias Betsch, CEO of Flight Design, says this: *** “Our ongoing customer surveying shows us that price tops the demand list from customers and we believe our prices can result in sales volumes of 200 to 500 aircraft per year.” *** As I’ve noted here before, if you’d like to put in your $.02 in the design/configuration process, you can still do that as the final design is still in flux: Get involved in the survey. You might even win a Garmin aera 500 GPS for your trouble. *** Flight Design plans to certify the C4 to several international standards ensuring compliance with both EASA and FAA regulations. *** The German company has already successfully gone through several rigors including LAMA and ISO audits. It also just gained EASA Design Organization Approval that permits it to progress on its own schedule with only oversight monitoring from EASA, which minimizes a lot of cost and time drag on the process. *** Best of success to this progressive company which has done so much to help establish the LSA movement in America with its quality aircraft and broad and growing sales and service network.