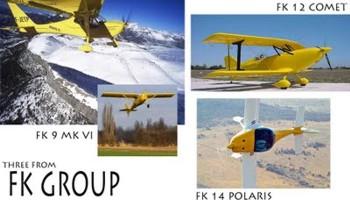 Two decades of hard work, sharp design and marketing vision, and keeping a high bar for quality production recently brought FK Group, German makers of three European “ultralights”, an award from Aerokurier magazine for best manufacturer. FK beat out Remos and other top light sport builders. *** The latest good news from the FK 9 MK IV producer, (a lovely ASTM-approved LSA I’m eager to jump a hop in), is the newly completed second factory that will complete the company’s goal of producing 100% of its aircraft, from fab to outfitting to painting, all in-house. *** A company release praises FK’s association with Cirrus, (lamentably in suspension of its own low-wing Polaris LSA project – also manufactured by FK – to marshal efforts on its Vision jet), for the “huge production knowledge” in expanding its facilities. *** The company also grew its workforce by 40% this year – and that in a down economy! *** I encourage you to check out this company and the FK 9. More than 400 have shipped so far throughout the world – most impressive. *** I’m hoping the FK 9 will soon be joined in ASTM certification by its sister ships: the Polaris and the FK 12 Comet, a racy-looking biplane LSA that is back in production in Europe and moving toward ASTM approval. *** Keep your eye on these folks. Over 20 years they’ve built a solid reputation.