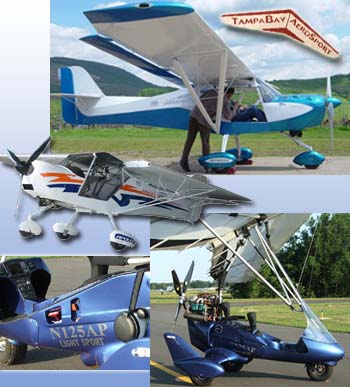 Monsoon 912 can be equipped with the American-made quick-fold Manta Ray topless wing. TampaBay reports they already have 18 orders for the new Monsoon (they are fast becoming one of the largest trike sellers in the USA). You have several wing choices best explained by contacting TampaBay. Apollo Fox also features a quick folding wing.

Our SLSA (Special Light-Sport Aircraft) List is popular with visitors and often generates a heads-up from alert readers about some new SLSA approval that snuck under my radar. This time the heads-up made me aware of new models in two forms. *** Please welcome TampaBay AeroSport’s Apollo Fox airplane and Monsoon weight-shift trike, to which I’ve assigned SLSA numbers 80 and 81. TampaBay, aka Apollo Aircraft, has been deeply involved with Light-Sport Aircraft for some time and previously won approval for the Delta Jet trike, which sells for a reasonable $38,000. Monsoon is a sleek, highly-engineered trike available with Rotax 582 or either 912-series engine for $45,000 to $58,500. *** In early 2008, the Florida Zephyrhills airport-based TampaBay also won an airworthiness certificate for their fixed wing Apollo Fox airplane. This European two seater is a variation of the popular design originated by Avid and Kitfox. With the 80-hp Rotax 912, Apollo Fox sells for a very modest $68,950 but…this includes an emergency airframe parachute. Many pilots will appreciate that TampaBay offers BRS parachutes as standard equipment on their SLSA with the not-inconsiderable cost built into the base price.