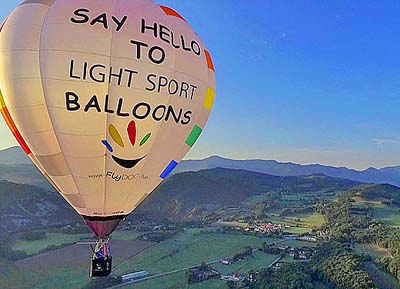 FAA’s Light-Sport Aircraft category involves quite the intriguing mixture of aircraft. Fixed wing aircraft of many descriptions, weight shift, powered parachute, gyroplanes, motorgliders, seaplanes, of course, and, lighter-than-air. Every niche has been well explored …except for that last one.

Now comes FlyDoo from France, an LSA-category-fitting hot-air balloon. Designer Leandro Corradini thought he could deliver something that didn’t exist in the market so he set up shop to supply envelope, basket, burner, and more in a practical, lightweight, compact, and easy-to-transport and -store package.

FlyDoo breaks down compactly enough that you could easily store it in your house or apartment. He even shows pictures of transporting it to a flying field by adding a wheel and tow bar kit to the gondola making the aircraft into a small trailer that can be towed by a bicycle. 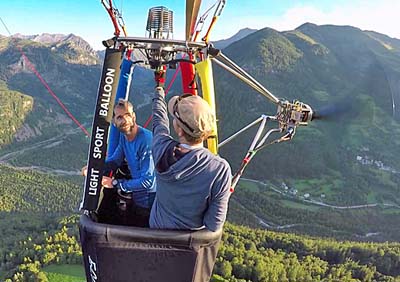 Leandro observes that established balloon manufacturers are accustomed to working in the FAA or CAA certified aircraft environment, often building large balloons used commercially to give rides. These producers have smaller aircraft but evidently pursue the higher cost variations. They may not be familiar with ASTM standards as used for all Light-Sport Aircraft and no others have chosen to address the LSA market.

Corradini views hot-air balloon flying as a simpler, easier, friendlier way to fly that can relieve stress rather than create it. To add to the relaxing outcome of a balloon flight, Leandro also gave his LSA LTA a VTU.

VTU probably threw you as it is not a term you hear for aircraft, unless it’s a Harrier jet or the newer F-35. Either of those seems about as far away from FlyDoo as you can get.

VTU stands for Vectored Thrust Unit and it is something unusual for a hot-air balloon.

Corradini’s VTU can be attached to the basket or gondola and provides directional control and thrust. His VTU is powered by an electric battery pack. The whole system adds only 55 pounds. 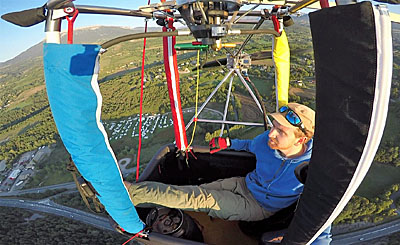 Designer Leandro Corradini uses his right hand to work the steering bar with button throttle for his Vectored Thrust Unit.

Maneuvering with the VTU appears surprisingly simple. Using a steering rudder (photo) with a push-button throttle, the pilot can rotate the balloon by angling the prop until balloon and gondola reach the desired position. Then the pilot centers the rudder and applies thrust to more forward in the desired direction.

Current LSA regulations do not allow his electric powerplant, but that might be solved by the time FlyDoo is fully ready for market. Although he has not yet gotten FAA acceptance, Leandro said he has designed from the beginning to comply with ASTM standards for LTA that some years ago were completed by the F37 committee of ASTM. 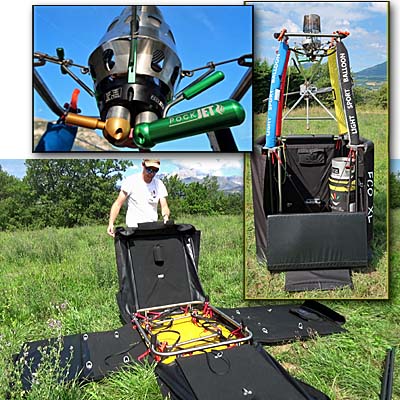 Because no prior company has offered an aircraft using those standards, it seems likely FAA will want to audit this first LTA entry. Until passing muster with FAA, FlyDoo can be made available as an Experimental-Amateur Built.

Aiming for production in 2019, Leandro is currently estimating FlyDoo’s price at about $21,000 covering foldable gondola, the custom burner unit and controls, plus the balloon envelope. You may add the VTU, with batteries and chargers, for an additional $14,000.

American balloon enthusiasts can see FlyDoo next month at the Albuquerque International Balloon Fiesta in New Mexico over October 6 to 14, 2018. The Albuquerque gathering is enormous with many hundreds of colorful balloons — including some with rather fantastic shapes. The main event is a mass ascension that has become one of the most photographed spectacles in the country.