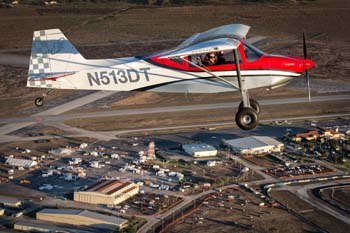 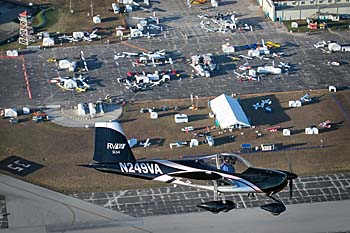 The Van’s Aircraft / Synergy Air RV-12 flies above the Expo. 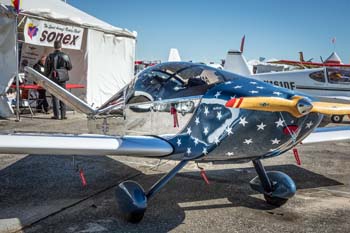 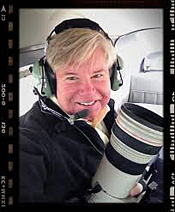 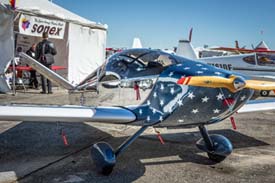 It was cool but abundant sunshine provided good conditions for an excellent event at the tenth Sebring. Morning winds died down and allowed plenty of demo flying opportunities and even for those who didn’t go aloft, the Manufacturer’s Showcase allowed visitors to see numerous aircraft doing low fly-bys. The combination of readily available demo flights that could be conducted with a minimum of hassle thanks to great support from contract tower personnel and the display of most LSA or light kits in recreational aviation offered ample opportunity for buyers to step up … and sales action appeared quite strong, a sure sign of improving conditions after years of sluggishness.

Many exhibitors reported multiple sales, proven by deposits changing hands and orders being written. Ken Scott of Van’s Aircraft — which works closely with Synergy Air, builder of the ready-to-fly RV-12 SLSA — said it was the best show ever for his company. “We brought two aircraft to the show and I’m estimating we gave at least 50 demo flights,” Scott said. “That’s the beauty of this event; they make it easy to get our airplanes out to give demo flights and that helps sell airplanes.” A wide variety of aircraft flew most of the day each of the four days. Obviously some very talented photographers were present as seen in Jim Koepnick’s superb images presented with this article. He was joined by other professional journalists from several news organizations.

Expo public relations people noted, “Four aircraft debuted at Expo [including] Ran’s Aircraft‘s S-20 Raven, Tecnam Aircraft‘s new Sea Sky on floats, the only such model in the U.S., the Zigolo Ultralight Motorglider from Aeromarine-LSA, and the Super Petrel LS from Florida Light Sport Aviation.” In addition, we saw the first public appearance of Progressive Aerodyne‘s Searey Elite powered by the 115-horsepower Rotax 914 turbo. Although Sonex staffers have attended with an inside display in prior years, the 2014 event saw the Wisconsin company that makes such affordable Sport Pilot eligible kits mount an aircraft display (photo).

Bill Canino, President of SportairUSA, also called the event a successful one for his company. “We talked with many serious prospects and have a long list of folks who were willing to give us their information, indicating a serious interest in buying an aircraft. Our list from this event is longer than we gathered at other major air shows last year.” Canino also had kind words for the helpfulness of some 240 volunteers. “They bend over backwards to help you with anything you need.” Airport manager Mike Willingham and key man Gary Filip also praised the work of Air Boss, Inc., which managed air traffic operations. “All the pilots spoke very highly of how Air Boss managed air traffic flow and how cooperative they were, and we will definitely be bringing them back next year,” Filip said. “George Cline and his team did a great job.”

Expo Director Jana Filip announced the theme for Expo 2015 as “The Next Ten for the Next Gen,” referencing that next year will kick off the Expo’s second 10-year run now that the event completed its first ten years and has firmly established itself in the aviation calendar of events. The 2015 dates are January 15-18. A primary original goal of the Expo — which like most airshows works hard to pay its bills — was to attract attention to the airport and its capability as a potential base of operations. This tenth year may have seen the success of that goal as Willingham also hinted at a big announcement that Sebring Regional Airport will be making soon about a new major tenant. Stay tuned for more on that and other news from Sebring 2014.

This article was prepared and uploaded from Bimini island in the Bahamas where I am attending the fourth Bahamas LSA fly-out arranged by Aviators Hot Line and AHL’s Light Aviation Edition. Another flock of Light-Sport Aircraft flew over the Atlantic to the only other country that accepts pilots using the Sport Pilot certificate.