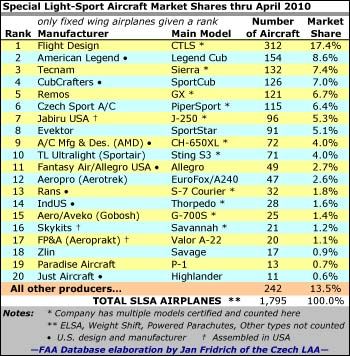 Cub replicas from two U.S. producers — CubCrafters and American Legend — represented one third of all SLSA registered in 2010, even higher than their common 20% share. As always, hearty thanks to Jan Fridrich for his hard work to gather all this information.

Sun ‘n Fun was a bright spot for the light aircraft industry as more than 20 sales appeared likely or were consummated. Yet anecdotal reports about generally sluggish sales were confirmed in a recent review. At least until Sun ‘n Fun, Light-Sport Aircraft FAA registrations show 2010 was even slower than a tough 2009. Last year, the industry registered 234 airplanes (plus weight-shift and powered parachutes yielding approximately 275 total LSA of all types). That’s more than 20 airplanes a month, yet 2010 appears to have slowed to around 15 per month. Those figures compare with about 45 per month back in 2006 and 2007. *** Why? No one has a crystal ball, but common suspects are: * an oscillating stock market causing hesitation among would-be buyers; * government budget problems, both in Europe and in the U.S.; * a still-stagnant housing market; and, * a widely-held feeling that LSA are still proving themselves, both for the certification method and many unfamiliar brands especially when the latter affects perceptions of customer service. *** I believe the industry is addressing the last issues, but the rest are far beyond the control of producers, even as a group. Nonetheless 2010 offers a couple surprises and some familiar results. Following is a brief recap to accompany our standard chart, which shows market rank expressed as total fleet size since the first registrations in 2005. *** The top surprises are a strong performance by CubCrafters, which registered 17 aircraft in the first third of 2010 (January through April) moving up to the #4 position, and the arrival of Paradise in the Top 20 Ranking. For 2010 FAA registrations, the SportCub builder was trailed by Flight Design at 9; Tecnam at 8; CSA (PiperSport) with 7; Cessna 6; American Legend, Arion (Lightning), and Paradise at 3 each; and TL (Sportair USA), Aeropro (Aerotrek), and FPNA at 2 each. *** However, some familiar Top 10 brands are eerily quiet: Remos, Jabiru, Evektor, and AMD. One possible bright spot: the euro’s sharp decline against the dollar may reduce the retail price of European imports. Another: Sun ‘n Fun sales success may be the beginning of a new phase.