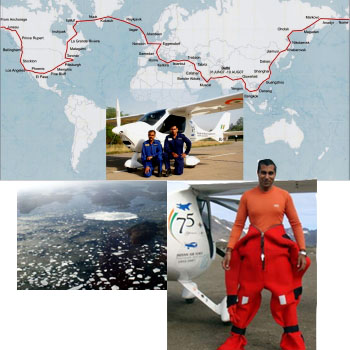 Many other airplane categories have tried round the world flights, but it’s now been done by a Light-Sport Aircraft. Flying a Flight Design CT, Indian Air Force Wing Commanders Rahul Monga and Anil Kumar will claim a new record by successfully flying around the world in 79 days. Part of a celebration of the Indian Air Force 75th Anniversary, the two pilots covered a total distance of 40,497 kilometers (25,310 miles) in 79 days flying over 19 countries (Myanmar, Thailand, Vietnam, China, Russia, USA, Canada, Greenland, Iceland, UK, Germany, Italy, Greece, Turkey, Iran, Pakistan, and India).*** During the expedition, Commander Monga became part of very small group of pilots by soloing across the Atlantic in a single engine aircraft. Kumar had to go via airline so the CT could fly longer. Despite missing this exciting segment Kumar expressed appreciation for the CT: “It’s a fantastic machine, very reliable…it got us home and there were no problems. We had good support from the manufacturer.” *** The duo and their CT weren’t far away from AirVenture Oshkosh 2007 but weather had delayed them and they elected to pass the big event in order to stay on the record attempt.