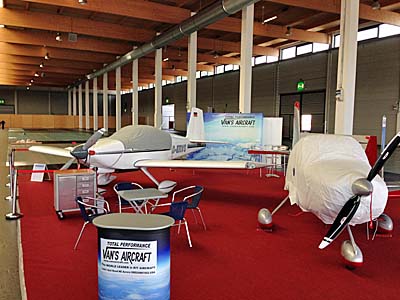 Though looking rather lonely in a nearly-empty immense hall — one of several at Aero — the Van’s Aircraft display appears all ready, days before opening. 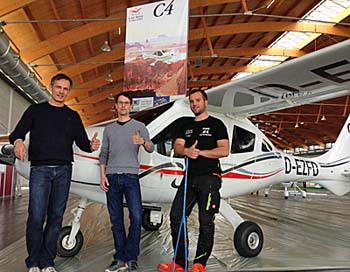 The great halls of Aero are beginning to be populated with aircraft, even as most of the gymnasium-sized spaces remain significantly empty. It was only Monday and the show does not open until Wednesday, so with common airshow nonchalance … “Oh, plenty of time remains.” After being an airshow regular for more years than I care to count — several decades’ worth — the situation is par for the course. Even the night before a show opens, the exhibit area appears in a state of pandemonium. Year after year, I can see no way it could all come together in time for the first day when the entry gates are unlocked, yet when the sun rises on opening day, sure enough, nearly everything seems in place, people are streaming in, vendors are dressed in airshow logowear and are ready to talk airplanes or flying gear. It never ceases to amaze me.

So, with a whole two days yet remaining, Aero’s nearly empty halls are not a major surprise. Airplanes will be trailered or hand towed into position, displays will be finished, literature will be set out for the taking (at least for those that haven’t gone virtual with electronic-only “hand-outs,” as is becoming increasingly common), the protected plastic sheeting will be removed from the carpets, and visitors will never know the chaos that reigned only hours before. The magic of airshows is about to begin again.

The following photos were taken of airplanes already in position. Their show mates will soon surround them but for a Monday, these images grabbed my attention either for their distinctive features or their eye-catching paint jobs. Enjoy!

One final component of the pre-airshow rush are those airplanes that are latter stages of development, some completed barely enough to be made ready for display to show futuristic concepts and others nearer to production as defined by their maiden voyage aloft.

One of the latter was the Flight Design four seat, to-be-certified C4 (see bottom photo) … from the company that still leads the fleet with more LSA flying than any other producer (their CT series).

Posing proudly for my camera in their casual set-up garb, later to be replaced with business suits and such, the Flight Design team was carefully positioning their non-conforming prototype C4 that had just taken its first flight a few days before following years of planning, fabrication, assembly, and careful preflighting. This is no mockup; it is the real flying machine. I’ll have more about this and other developments as the show blossoms into mature airshow stage with immense hall after hall full of airplanes and flight hardware and software of every description. Aero is one of Europe’s largest aviation events and always finds a way to be interesting and relevant. I am sure 2015 will prove to be no different but the only way you will know is to attend or click back for more details day after day.