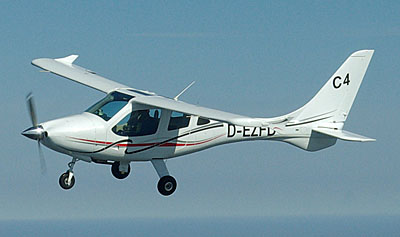 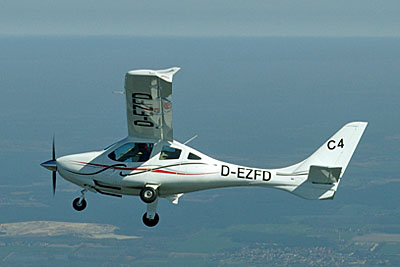 all photos and video courtesy of Flight Design

Aero 2015 is open! The halls are full of shiny airplanes displayed with the usual European sense of style and panache. Visitors are backed up at the entry gates awaiting the official opening time. (We sneaky media journalists are allowed in earlier to get photos and begin interviews with vendors.) It is a great event, for Europe and for aviation.

I already have some airplanes in mind for reporting, both brand-new designs and the sort you never see in the USA. I will aim to prepare coverage of some of them and report as soon as time permits. Yet first, I want to talk about a project that is equally exciting.

I refer to the Flight Design project aimed at the general aviation world, that is, of airplanes with more seats than allowed in the LSA space … in addition to more speed, more weight, and other capabilities. I have mentioned the C4 but in this article I have more for you. As noted in earlier articles, although C4 is not a Light-Sport or light kit, it is created by a company that earned built its brand in the LSA space so I consider it relevant for ByDanJohnson.com readers. It’s also expected to be (relatively) affordable, so it fits that way as well.

On April 9th, Flight Design flew their C4 that has been in development since 2008. After a period of discussions, preliminary engineering studies, and the beginning of CAD work to create this new machine, C4 began to take shape in about 2011. While the company once thought it could fly in 2014, they got involved with a “safety box” project (basically, “crush zone” engineering for airplanes as we’ve seen in automobiles for years) and this worthy diversion swallowed some of the time intended to put C4 in the air. The company backed up and took another run, more recently promising to get airborne before the Aero 2015 show … and they achieved their goal, with about four days to spare.

“C4 really performed as expected,” reported Tom Peghiny, President of Flight Design USA, importer of the German company’s products and test flight director for the C4 development. For the 55-minute flight, Peghiny flew alongside the C4 non-conforming prototype in a Cessna 172 chase plane. “It appeared and test pilot Damian Hischier confirmed that the C4 is stable about all axes.”

Hischier also reported, “The spiral stability of C4 is good and its directional stability is good.” While noting that engine operating temperatures were acceptable he acknowledged that further work may be necessary for operations in the hottest climates. “But don’t change a thing aerodynamically,” Hischier said supportively. Engine temperatures will be remedied primarily with cowl changes focused on cooling, yet Flight Design is pleased with the Continental IO-360-AF engine that performed very well.

“Flight Design engineers can work on reducing some friction in the controls,” Hischier noted, “but leave the rest alone.” Most prototype airplanes go through refinements after the initial flight verifications even while most of the group working to achieve the first flight were pleased that the new airplane performed so well.

“We observed the C4 accelerate away from the C-172 chase plane during simulated approaches to landing and in simulated go-arounds,” commented Peghiny, observing from the Cessna. “I could also see that during the 30 degree bank turns the test pilot needed no control correction and he reported that pitch forces were light,” added Peghiny. “The plane appeared to be on rails, it looked very stable. Damian said he was comfortable getting close to us for the photos and videos shot during the maiden flight.” On board avionics are supplied by Garmin with the G3X Touch augmented with TSO analog instruments. Garmin has become a vital partner to Flight Design as C4 moves forward.

“Very few first flights proceed through the entire test card,” explained flight director Peghiny. “Yet we completed all of the points permitted under the EASA-established Flight Conditions as specified in our initial Permit to Fly authorization.”

In this short (80-second) video you can see a few scenes from C4’s first flight, compliments of Flight Design and shot by Tom Peghiny: