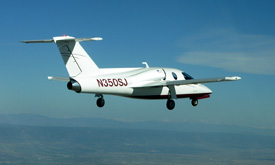 On May 12, 2006, the Excel-Jet Ltd., Sport-Jet (specs) made its maiden flight. The single-engine VLJ is a second generation design following designer Bob Borhnofen’s Maverick TwinJet. The only problem the team reported, “We need a faster chase plane to photograph Sport-Jet!”

OK, as with last summer’s SPLOG on SpaceShipOne, news about a jet may seem odd on a website about Light-Sport Aircraft. Well, it does have “Sport” in its name and it is the lightest of the new flock of Very Light Jets (VLJs). But mainly, I just think this is an impressive development of an American-made single engine jet. Sport-Jet is one spacious, high-performing jet aimed at regular GA pilots. About his first flight, pilot Ron McElroy said it was, “…like shooting a BB out of a slingshot!” Developer Bob Bornhofen and his small, highly-focused team were all smiles. Unlike projects like Eclipse, built on a massive $400 million investment or Cessna, backed by a huge conglomerate, Excel-Jet is more an efficient “skunk works” project. Team Excel flew Sport-Jet within two weeks of delivery of their Williams jet engine. First engine start and taxi tests commonly take 2-3 months. Watch the GA press for more coverage of this cool VLJ. My next SPLOG will return to LSA and ultralights.