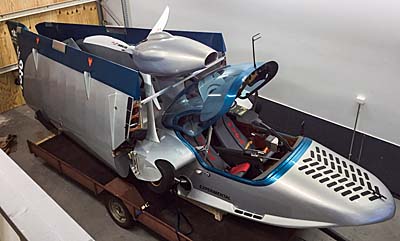 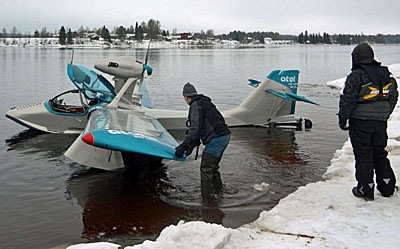 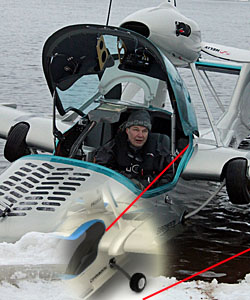 Inset shows the wheel fairing that will come on a completed aircraft. 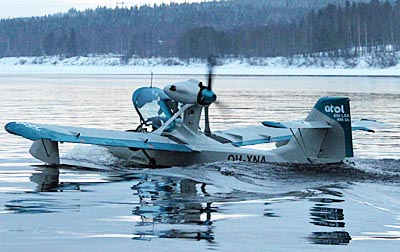 Click this link to get a good overall look at the airplane, which you can spin around with your mouse or pointing device.

Ah, the Christmas season is soon upon us (or already is judging by familiar music playing on every speaker you hear). It sounds like a great time to go put your new seaplane in the water … especially if you live up by the Santa Claus toy workshop. Wait a minute! Can that be right? Yup! Atol Avion Ltd., recently notified us, “We have finally performed first water taxi tests of our production prototype on December 14th, 2014 at Rovaniemi, Finland. After thorough systems tests, water taxi tests were performed on Kemijoki River near the Arctic Circle … just a few miles from Santa’s home. Our plane worked as planned and proved to be even better than expected.”

As a Florida resident, I have plenty of local acquaintances that think such an exercise sounds crazy, to be out water testing an amphibious airplane in winter. They mean here in Florida where it’s on the cool side … you know, 50s and 60s. Yet look at the photos and realize we are not showing several images that reveal the Atol airplane with ice droplets formed over its tailplane parts from cruising around in water cold enough to have mini icebergs floating.

I ran into the Atol Avion crew at last year’s Aero Friedrichshafen event (another is coming over April 15-18, 2015). The group at the show was composed of a number of airline pilots and among them Anssi Rekula, whom I first met at AirVenture Oshkosh a few years ago. Anssi is a cofounder of Atol Avion. He worked as a licensed maintenance and flight engineer at the Finnish Coast Guard keeping Search-and-Rescue helicopters flying before starting a career flying airliners for Finnair.

Fresh as the photos look, the Atol airplane has been around since 1984, albeit looking quite different from the example in the nearby photos. In an age where we have amazingly sophisticated designs made of modern materials — think Icon’s A5 and MVP.aero’s namesake MVP as but two gleaming examples — Atol has a core made from wood. Why would they stick with such an “outdated” material?

Wood composite structure is one of Atol’s strengths, Anssi told me. “The strength-to-weight ratio of wood is superior to the majority of building materials. Only plastic structures reinforced with carbon and aramid fiber exceed the qualities of wood, but at a much higher price.” Also, carbon fiber structure is so strong, Atol expressed, that structures need to be over-dimensioned in lighter aircraft in order to attach them to the other structure. As a result, competitors’ aircraft built of carbon fiber are much heavier than Atol. As an example, partly due to building materials and partly to offer features they believe customers want, Icon had to go obtain a weight exemption from FAA.

Speaking with authority up in the Arctic Circle, Atol stated, “Contrary to what some believe, the wooden structure posses excellent weather resistance. If the structure has been designed and built correctly, and it is stored and maintained properly, it can be used for decades.” In our climate-obsessed world, a strong feature of wood structure is a smaller carbon footprint compared to other material. Also, Atol notes, “Wood binds carbon, whereas the manufacture of aluminum and reinforced plastic materials release it.”

Anssi was very proud of the recent water taxi testing in the icy waters of northern Finalnd. “We have been waiting for this day for a long time and surely our clients will appreciate the product they’ll get.” The company already has orders on the books but now offers two remaining slots for customers in the 2015 production schedule before the price of the basic plane will be raised from €125,000 (about $155,000 at today’s exchange rate) to €139,000 ($172,000) for orders received after May 1st, 2015. My close examination of Atol at Aero last year revealed many clever engineering qualities. Combined with a well-established airplane that has good flight qualities, Atol deserves consideration.