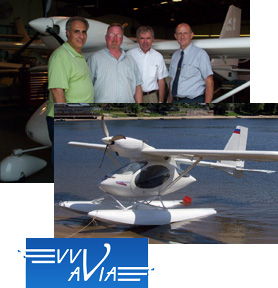 It’s been a couple quiet months since the last SLSA approval but we finally gained another. At Oshkosh 2005, an unusual LSA candidate from Russia grabbed the attention of many. Sigma is a high-wing tractor-engined airplane with a unique teardrop-shaped fuselage offering a helicopter-like view for the pilot and passenger. The aircraft from VVV Avia features a basic metal framework with composite wings and fairings. On June 27th, Sigma became #51 to win Special Light-Sport Aircraft approval after a long effort thanks partly to support by LAMA president Tom Gunnarson. FAA designated airworthiness representative (DAR) Joe Gauthier and local FAA Manufacturing Inspection District Office (MIDO) Senior Inspector Gregg Behonick spent the better part of the day reviewing documentation and inspecting the aircraft, culminating in their granting of an SLSA airworthiness certificate. “The inspection was conducted at importer A&P Aircraft’s facilities on MacArthur Airport on Long Island, NY where proprietor Edward Libassi runs an aircraft service center,” reported Gunnarson. The Russian company also builds the more conventional-looking Elitar-202 but it is too heavy to qualify as a LSA.