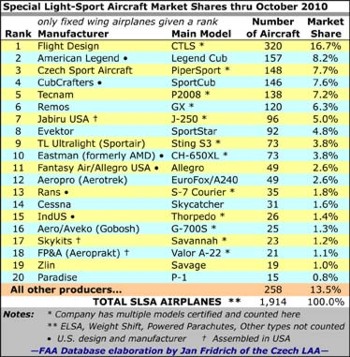 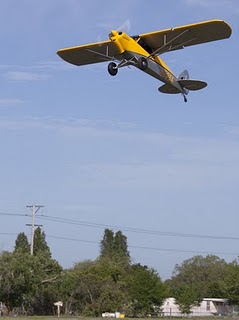 Dan Johnson’s periodic LSA market share report (compiled by Jan Fridrich of the Czech LAA) reveals some interesting trends. *** For those who haven’t seen these snapshots of the U.S. LSA market before, Dan focuses on FAA registrations, not sales quotes from manufacturers. While this indicator may lag sales figures, over time it gives a more accurate view of who’s actually delivering airplanes to customers. *** The not-surprising but important highlight has to be Piper’s shot in the arm to overall LSA production. *** The venerable company registered 43 airplanes this year (24% of all registrations!) and will no doubt be stronger in 2011 as sales continue to mount for its sexy PiperSport. *** CubCrafters really surged this year with 37 registrations, a 20% market share, on the strength of its 180hp-powered Carbon Cub SS. My local field has one, and it’s quite a performer. *** In my recent post I mentioned Cessna’s surge now that production at the China factory is in full swing. A total 29 Skycatchers (16% of all registrations) went out this year: Cessna expects to ship 150-plus next year. *** The market leaders, including Flight Design and American Legend are hanging in there, and newcomer Jabiru/Arion with its new Lightning was a big hit with 9 registrations for the year. *** Sleepers to watch include Sportair USA’s Sirius (4), Aerotrek (4), Skykits Savannah (4), FPNA A-20 (3), and 3Xtrim Navigator 600 (2). *** Dan parses the numbers and projects, to end of 2010, a further slide of 4% over 2009, which was nobody’s favorite year. *** But with the economy slowly expanding again, a lot of folks are reading the tea leaves and hoping for a much stronger 2011. Let’s all keep drinking that happy tea.