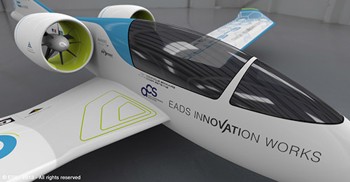 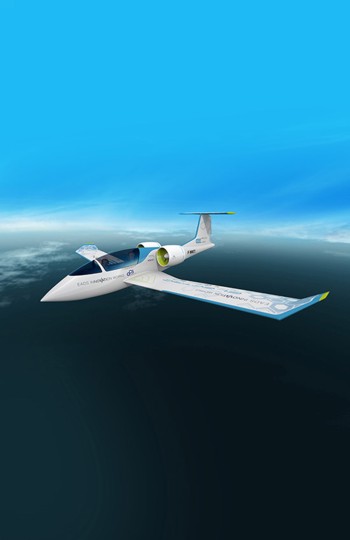 Computer graphic of E-Fan in flight. 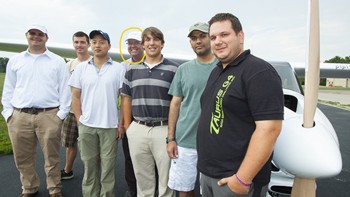 “How ya gonna keep ‘em down on the farm … after they’ve seen Paree?” That’s a timely reprise of an old show tune to bring our attention to the Paris Air Show, which is sending out some ripples in the “What’s New” Dept. Chances look better every year that electric flight will be a major player in how we take the air. And for those of you who think that’s just a bunch of hot air, you could be right, too! Read on.

Jason Paur who writes for Wired magazine gets to do all the fun stuff I just get to fantasize about … specifically, electric flight. He’s at Le Bourget Field in Paris and filed this report on an exciting new electric prototype that fits nicely into the Light Sport Aircraft specification. Here are some highlights and you can read the rest first hand at the link above.

First, it’s an electric aerobatic trainer…not a combo of descriptors that’s all that common. It’s called the E-Fan and comes to us from one Didier Esteyne, the same engineer/pilot who brought us the electric Cri-Cri a couple years ago. That bizarre little creature – the aircraft, not the pilot – mounted a couple small electric motors onto the nose of an existing single seat homebuilt airplane and showed us that you can indeed have electric flight right now and have fun doing it too – the Cri Cri is also aerobatic.

Now comes his E-Fan, a significantly more sophisticated entry into the wattflight sweepstakes, a joint effort with EADS, the aerospace giant that produces the Airbus A-380. Jason reports EADS gave Esteyne the go ahead last October, and just a few months later, he wheeled it into Paris (the maiden flight won’t come for a few months) for the 50th anniversary of the show. Nice. Leading some exciting new innovation wrinkles are the electric ducted fan units on either side of the fuselage. If you’ve seen the near-legendary A-10 ground attack jet you know what a ducted fan is: essentially a shrouded prop that has some performance and efficiency advantages over sticking a prop all by its lonesome into the relative wind. Wikipedia serves up a good summation on the efficacy of ducted fans:

propeller blade tip vortices are reduced, bringing higher thrust efficiency especially at low speeds and high static thrust level (as in airships and hovercraft…and the A-10)With proper design, air velocity is controlled through the fan to bring more efficiency at higher air speedsA ducted fan can produce the same thrust as a larger diameter free prop. One benefit: lower-to-ground landing gearQuieter operationlimited thrust vectoring possible (think: tiltrotors)Greater safety on the ground – you can’t accidently walk into a ducted fan blade, at least not from the side

Since electric flight realities are still challenged by a high weight-to-power ratio (heavy batteries are the culprit here since electric motors are highly efficient and smaller than equivalent-powered gas engines), anything that might help shift the ratio toward the power side is worth considering. That was Esteyne’s rationale: small motors, big thrust. And smaller motors means, you guessed it, a smaller battery payload, which as we know is still the big stumbling block. Bonus: lighter weight overall, and less money to build…and sell. As designed, the E-Fan motors along just fine with just 20 kW power per engine. ”Just fine” means one hour’s flying duration at around 110 mph. Some initial specs: • wingspan 31 feet • max weight 1,212 pounds, right in the LSA wheelhouse • batteries: two, 250 volt, 40 amp-hour, multi-cell lithium ion battery packs in each wing root • ground help: Paur reports, “To maximize flight time, one main landing gear wheel has a small electric motor that can propel the airplane up to 35 mph, which is more efficient than using thrust to taxi.”

As an acrobat, E-Fan’s endurance drops to 30 minutes. That’s about the turn-me-loose endurance level of most acrobatic students anyway. Still, we’re talking a two-seat electric airplane, folks. The stated goal of the project is to produce a certified electric aircraft for the market. We’ll be keeping an eye on the E-fan. Meanwhile, perhaps Yuneec can work out whatever has delayed its two seat, beautiful E-430 electric LSA soon so we can get some of these aircraft in the air and really get the excitement going.

Now for the “hot air” segment of our blogcast: Although it’s not an LSA-worthy contender, this new breakthrough, also debuting at Paris, is just too good to pass up. Wait for it…a hot air-driven helicopter! The Sherpa, by a new Belgian company named Sagita, intends to make the case that choppers can be less complex and more efficient, reliable and affordable. The technology eyebrow-raiser here: Sherpa’s rotors are directly driven by enclosed turbines which are in turn powered by hot air and exhaust fumes from the helicopter’s conventional power plant. Sagita claims an 85 percent efficiency doing things this way…and another big plus: no tail rotor needed.

Here’s a sketch of how it works: the Sherpa’s engine drives a compressor which has an air intake at the rear of the helicopter. Some of its compressed air goes back to the engine to boost combustion, but the rest of it first extracts heat from Sherpa’s cooling system, then mixes with engine exhaust fumes to heat the air to 212 F. That hot air mix then feeds to two turbines, which directly drive the eggbeater’s two contra-rotating rotors. Sagita says no additional cooling measures are needed, and fewer moving parts mean reduced maintenance. There’s a full-scale mockup at Paris, but to date, only a one-fifth scale RC model has flown. Sagita calculates the 573 pound full-scale helicopter will be capable of lifting 377 pounds of payload, cruise at 85 knots, reach out 250 miles and endure for 3 hours. Ceiling: 6,600 feet. Consider Sherpa a proof-of-concept that could lead to a whole new generation of simpler, safer, cheaper choppers … or possibly UAVs. Why not? Everybody else is jumping into that market. Target price: $200,000. First flight is projected to 2015.