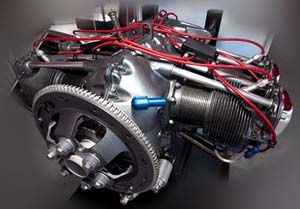 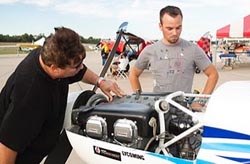 Attendees check out the 233 at Midwest LSA Expo. 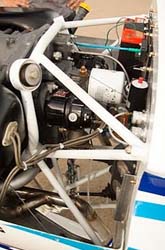 I got an email today from Christopher “Doc” Bailey of Renegade Light Sport that the Falcon 2.0 just made its maiden flights with the brand new Lycoming IO-233-LSA engine. *** A video Doc linked to me gives the salient details. The Falcon LS was initially imported by T&T Aviation which sold the distributorship and inventory to Doc and his partners last July, as posted here earlier.

You can read more on Doc’s ambitious plans to market 100 of these beauties with standard synthetic vision EFIS panels from Grand Rapids Technologies for $125,000 in my column due out next month.

Falcon is the very first airplane to fly with the Lyc 233. Renegade is working with Lycoming and Champion Electronics to develop it. *** “We’ll fly it over the next few months,” says interviewer and 35 year Aeronautical Engineering Professor Fred Schieszer, “and report back to Lycoming and Champion, which is developing the electronic ignition system. But after today’s flights, everybody has big smiles!” *** Test pilot Rob Runyon made four hops totaling thirty six minutes.  “Liftoff took 500 to 600 ft from a standing start, about the same amount of time as it took me to throttle all the way in, under 10 seconds.” *** “Max level power came at around 2400 rpm,” he continues. “It doesn’t wind up like the Lycoming 235, which might be a prop difference. It accelerates to 110 knots and keeps going; in the pattern, you have to get right out of the power, like a jet, or the speed will wind up on you. To keep it in flap range, throttle back to 2000 rpm.”

Runyon used 40 degrees of flaps and stayed high on short final intentionally. He’d been advised by Doc Bailey not to land at idle, given the gusty winds. *** “I approached at 70 and touched down around 55.” *** The Lycoming IO-233 makes the airplane a little lighter in the nose and balances within an inch of the original IO-235 installation. The engine weighs 38 pounds less, helping keep empty weight around 800 pounds, yet it still delivers 116 horsepower. The maidens are an important step in bringing the Falcon 2.0 to market after a false start with the previous importers. *** And if this beauty flies half as good as it looks, and the economy gathers steam, the biggest challenge for this ASTM-certified (with the O-235) sport flyer would seem to be simply getting it into production.