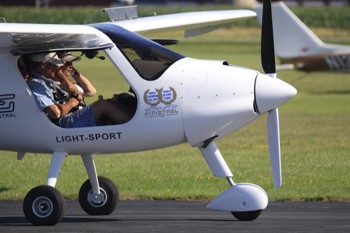 The FAA just published a petition for rulemaking from EAA, AOPA, NAFI, and GAMA that calls for sport pilot instruction hours to count toward Private Pilot and higher ratings. *** The petition calls for a change in the current regs that disqualify flight training hours for counting toward higher ratings, if those hours were taught by a CFI-S, which is a flight instructor who only has the Sport Pilot rating. *** The petition addresses FAR Part 61 and seeks to simplify and harmonize all flight training areas, and beyond that, actually makes sense when you think about it. After all, why should sport pilots have to repeat their initial flight training because they learned the basics in an LSA from an LSA-only-rated instructor? *** FAA personnel upon reflection (and prodding from the above named orgs) seems to have realized the unintentional discrimination against Sport Pilot CFIs, and by extension, Sport Pilot students, among other considerations, was making a statement about Sport Pilot training (or CFI-Ss) being somehow inferior to traditional CFIs and their training methods, which is probably pretty silly when you think about it. *** Every CFI I’ve talked to affirms that a Sport Pilot student learns all the requisite flight skills in an LSA to provide a solid foundation for advanced ratings. And since LSA are lighter in weight and therefore more susceptible to crosswinds and other nuances, you can make a good case that LSA must be flown with rather more sensitivity and skill on any given day than more traditional aircraft. Just ask all the high time pilots who’ve pranged an LSA because they refused to get sufficient transition training. *** So even though GA aircraft can be more complex, the basic skills learned in flight require the same attention to fundamentals. The argument is, there’s generically no fundamental flight skill significantly unique to any GA SEL training airplane that would somehow be skipped or incompletely taught by a CFI-S but not a CFI, if that CFI-S is properly trained of course. *** It’s not a law change yet, but a first step in the typically lengthy government process that will give anybody interested a chance to weigh in on the subject. This means you can comment here. *** Once everybody has posted their yays and nays, we can expect this minor kerfluffle to go away entirely and we can get on to fretting about other minor kerfluffles and the occasional big kerfluffle.