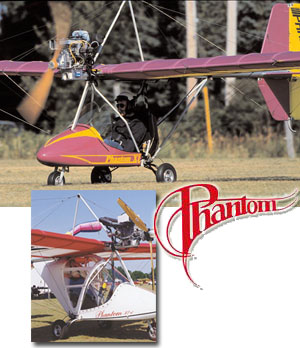 I’ve just updated a review of the Phantom X-1 (top) for the 11/07 issue of Light Sport and Ultralight Flying magazine. When built carefully to stay within Part (possible even with the 40-hp Rotax 447), it requires no pilot license or medical, no FAA registration, and no LSA airworthiness certificate.

If you fly a two-seat ultralight, I hope you’re aware of a big change just ahead: the January 31, 2008 deadline when you must transition such aircraft to Experimental LSA. Some have acted already. Many have not. FAA says that date is firm and will not change. *** But outgoing FAA Adminstrator Marion Blakey also said “No change to Part 103.” Called “Ultralight Vehicles” (not “aircraft”), this distinction now means something special. The Part 103 rule for single seaters rather quietly counted its 25th birthday in September 2007. This low-key event also celebrates aviation’s simplest rule — the entire FAR can be printed on a single sheet of paper!…and it is still alive and well. *** Examples like the Phantom ultralight have excellent flight characteristics and low prices. In late 2007, a Phantom X-1 kit is less than $15,000 and you can legally pay someone to build it for you. For less than the average price of a new automobile, Phantom is tough, partially enclosed, and very well proven.