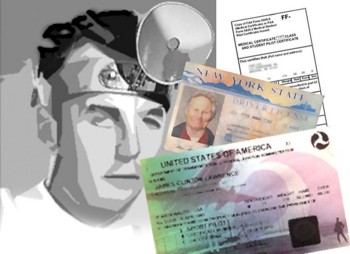 There’ve been some rumblings recently that the FAA is unofficially taking a look at the private medical requirement for pilot licensing. ***  Janice Wood, writing for General Aviation News, cites the efforts of an airport owner/operator, David Wartofsky, to petition the Secretary of Transportation to replace the FAA’s 3rd class medical with a driver’s license for private aircraft weighing under 6,000 lbs. *** Mr. Wartofsky makes some salient points, and calls the eventual loss of 3rd class medicals that all pilots face as “the greatest threat to aircraft ownership”. *** I’ve never thought there’d be a snowball’s chance in a blast furnace of the medical being removed, but there are compelling reasons to do just that — or amend the current rule to conform with the lesser medical requirement of a state driver’s license, such as requiring vision-corrective glasses when flying. How many drivers in 4,000 pound cars who barely passed their driver’s license requirements whizz by you head-on at a closing speed of 120 mph? *** Some of the downsides of the 3rd class medical: • High costs to manage the system • Overkill on the 3rd class requirements for physical health, which are equivalent to those required for a Commercial Driver’s License… while a light plane is equivalent in its potential crash impact to a passenger car; • Statistics show that barely 1% of all general aviation accidents are medically related. Light-Sport statistics, since the rule came into effect in 2004, reflect the same ratio of medical to all other causes of aviation mishaps, which supports Wartofsky’s contention that a 3rd class medical is no more necessary for light planes than for LSA. Another point on the LSA side of the equation: many owners are baby boomers who fly LSA rather than run the risk of losing their 3rd class medicals. *** Wartofsky’s petition, which you can view and sign, was published by DOT as required by law… and then buried by a comment period open until 2099! Sneaky sneaky, DOT! *** Pilots can get involved by adding comments to the petition and contacting their representatives in the House and Senate to support the petition. *** As Wood states, the objective is to force a full re-evaluation of the need for a 3rd class medical through a NPRM (Notice of Proposed Rulemaking).