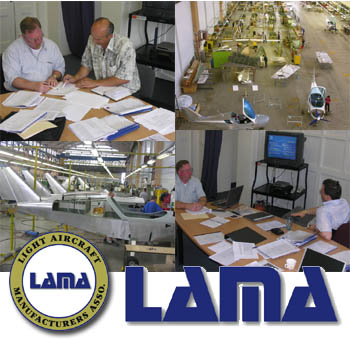 LAMA does audits in the USA and abroad as seen in these photos. The review is a week-long effort reviewing every page, every paragraph of all applicable ASTM standards. The two-part audit assures customers, insurance companies, and more that a manufacturer has all the documentation required to declare compliance.

FAA is more than half way through their assessment of the Light-Sport Aircraft industry. According to post-assessment interviews with companies, FAA teams performing these info-gathering visits have generally been satisfied but some changes will likely be made to assure better written records and procedures. *** In preparation for actions it believes will follow the assessments, industry business organization LAMA accelerated its effort to perform LAMA Compliance Audits on more companies. The industry association has been assembling an expert audit team, processes, and extensive checklists to make the effort easy on producers and very cost-efficient. *** LAMA Founder and Chairman Emeritus Larry Burke reports 22 companies are either done, in process, or in negotiation to become LAMA audited. When these are complete, possibly by next Oshkosh, LAMA says this will cover more than 80% of the Light-Sport Aircraft being sold. *** MARKET UPDATE — Following the 12/12/08 SPLOG, I want to clarify industry performance in 2008, a year most will record as “difficult.” In 11 months of 2008 producers registered 392 SLSA airplanes. In 11 months of 2007, the industry registered 499, so 2008 represents a drop of of 108 units or 21.6%. Any decrease is undesirable, but it’s less decline than in many industries.