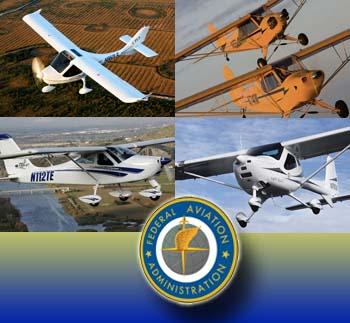 FAA issued a 20-year forecast for aviation to 2030. According the the agency Light-Sport Aircraft sales will grow by 825 per year through 2013 and then taper off to 335 per year. Hmmm? One wonders why it should fall so dramatically and so soon? Except in a lousy 2009, the LSA industry has generously exceeded 335 units per year — and this while the industry also had to build its entire infrastructure: a system of certification, distribution channels, service centers, parts inventory, trained flight instructors, and much more. *** The LSA industry’s best year was 2007 at 565 airplanes. Last year, the figure was only 234 units. In 2006, 491 units were registered and 2008 added 406 units… all numbers relate to new SLSA fixed wing airplanes; add 15-20% for other Light-Sport Aircraft categories as weight-shift, powered parachute, and glider. *** Given Cessna’s 1,000+ Skycatcher backlog, perhaps they’ll build 200-400 per year in 2011, ’12, and ’13. If the rest of the industry returns to 400-600 per year — approximately the track record so far — total production would be 600-1,000 SLSA per year. So, FAA’s figures appear in the ballpark… for the next three years. *** But then, what does the agency see happening to cause the industry to slide 60% to just over 300 units per year? Perhaps it’s because FAA assumes a net growth of just 6,099 general aviation airplanes over 20 years, or 305 per year. Yet GA manufacturers logged 2,119 single engine general aviation (SEGA) deliveries in 2008 and 965 even in the awful 2009, which is significantly more than FAA’s forecast 300 per year rate. It appears FAA envisions only modest growth for either GA or LSA in the next 20 years. Time will tell.