“I knew we had all the pictures we needed but I was having a blast and just wanted to keep flying Minifox,” wrote British aviation writer, Dave Unwin. In this article we welcome Dave back to give his description of a fun, highly affordable Part 103-compliant ultralight. 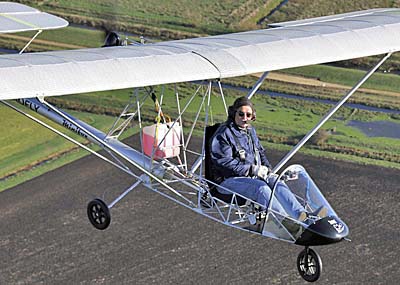 Minifox by Eurofly is a lot of pure flying fun, and it was just joyful to spend an agreeable afternoon on a well-tended grass strip shooting a series of touch ‘n’ goes in an open-cockpit single-seater.

Upon spotting Minifox at a show I was instantly intrigued and inquired with Dave Broom of Airplay, the UK agent for Eurofly of Italy. Dave told me that a Minifox kit could be completed for less than £19.000 or about $25,000. That’s not a lot of money for a brand-new flying machine, and it occurred to me that such a price could help reverse the current trend of making aviation ever-more expensive. In 1967, a new Cessna 172 cost around $12,750, and a Dodge Charger about $3,100. These days a top-of-the-range Charger is $52,000, but a Skyhawk SP is $307,000! 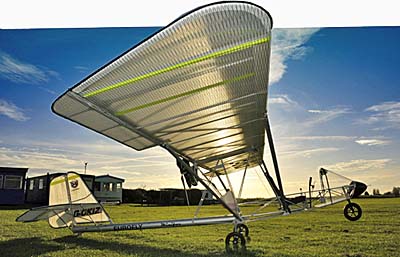 The ultralight’s high wing is strut-braced and covered with semi-translucent Polyant PX5 trilaminate sailcloth. This modern synthetic material is very robust and UV-resistant.

Dave Broom indicated Minifox is an easy one-man rig incorporating a New Closing Wing System (NCWS) using special brackets to simplify alignment of the wing with the wing attach points. NCWS allows the wings to fold aft and rest on the tailplane in provided wing supports. With wings folded the aircraft is only 7.5 feet wide, towable on most American highways. 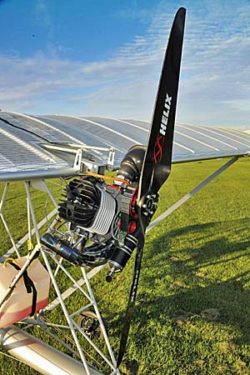 Eurofly offers several engine options for Minifox. My test aircraft is powered by the engine that Airplay recommends, a Cisco Motors 250 BullMax.

This 230-cc single cylinder two-stroke engine produces 33 horsepower at 7,400 rpm, yet only weighs 36 pounds with electric start. It turns a two-blade composite Helix prop via a Poly Vee-belt. On board fuel is a single four gallon fuel tank behind the seat. Main gear is built from 7075-T6 supporting three identical plastic wheels with solid tires and drum brakes, plus a small fourth wheel underneath the tailplane.

It all appeared very nicely made and I particularly liked the size of the control surfaces offering good control authority. Pushrods drive the ailerons and elevator, with cables for the rudder.

After a careful inspection I was eager to get airborne, and the Minifox looked like it felt the same way!

The only cockpit adjustment is seat cushions but a builder could fit Minifox to their size. They might also choose an optional fiberglass nosecone with small Lexan windscreen. Another option (though not on the test aircraft) is the Comelli pneumatic airframe parachute. 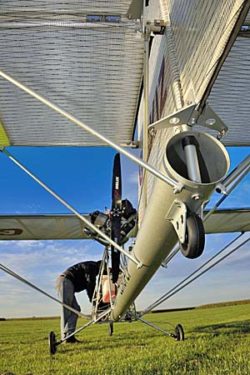 Once I’ve strapped it on — well, that’s what it feels like; it is literally not that much heavier than me — the controls and instruments are simplicity personified. The primary controls are rudder pedals and a centrally located stick with a handbrake. The throttle is to the left; elevator trimmer on the right. That’s all you need!

Importer Dave obligingly gives the recoil starter a hearty tug and the little engine buzzes busily into life. It is possible to do it when seated, although easier if you’re outside after setting the park brake and chocks. Being a pusher, you’re well clear of the prop. 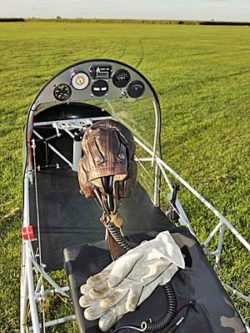 I found the nosewheel steering worked well and soon I was pointed into a 8-10 knot breeze. As Bullmax “comes on the pipe,” acceleration is really quite good and with just a hint of back pressure Minifox is airborne after a very short ground roll. (Read more about two stroke acceleration in Dave’s full article.)

Doing touch and goes on a quiet, uncontrolled grass field on a sunny day, Minifox is already starting to work its charm on me. In a world of GPS, ADS-B and 8.33 radios, the Minifox is a real throwback to almost the dawn of powered flight.

Minifox is positively stable around all three axes, and the generously proportioned primary flight controls provide excellent control authority, being both powerful and well-harmonized. The roll rate is acceptably brisk, especially if you help it along with judicious application of the powerful rudder. 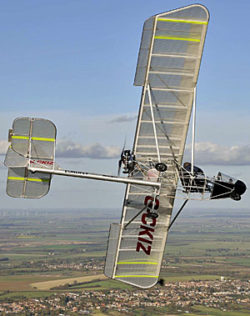 Minifox offers a field of view nothing short of exceptional. Lacking fuller instrumentation my best guesstimate is that the aircraft climbs between 400 and 500 fpm. Stall characteristics are very benign and slow flight is ridiculously slow, around 22 knots. At the other end the ASI showed 60 knots, however, to reach this velocity, the engine is running 7,400 rpm; a more practical cruise speed is 50-55 knots at 6,500 rpm. At this speed the motor is burning around 1.25 gallons an hour yielding a still-air range of about 125 nautical miles with 30 minutes reserve.

Minifox is available as a complete quick-build kit requiring around 50 hours to complete, or as a RTF (ready-to-fly) aircraft. Importer Dave claims that the kit requires no special skills and can be completed inside a week. From my review, I have to say this seems perfectly reasonable.

After Keith Wilson concludes his detail pictures, we sit outside in the sunshine enjoying a glorious day. Minifox is waiting, its nose pointing expectantly at the perfect sky. It really does seem such a waste for it to be on the ground, and Dave did say that I could have another go if I wanted…

“Hey, Keith, come and give the starter a pull, would you!”

Dave Unwin’s original article contains much more information for those who want to dig deeper. His writing style is also enjoyable and approachable.