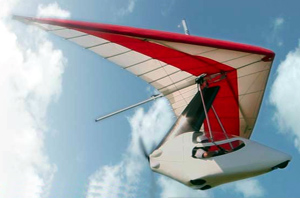 Seagull plans two or three derivatives of the Pod series. Escape Pod is powered as shown here. Pod Racer is unpowered for hang glider pilots who will be towed aloft (or wheel launched off a mountain ramp). Both have retractable gear and numerous other innovative features. Email Seagull Aerosports.

After four years of intense development (and more money than you might expect), the Seagull Aerosports Escape Pod made its flying debut at AirVenture Oshkosh 2006. Pilot Eric Rasmussen, proprietor of UFlyTrikes, a weight shift flight school and AirBorne dealership, took the sleek, retractable gear single place soaring trike aloft before a fascinated crowd at the big summer airshow. Designer Mike Riggs said, “People were running for the flight line to snap photos.” *** Those onlookers weren’t the only ones impressed. EAA judges showered the new rig with awards, giving Seagull’s Escape Pod both Innovative New Design and Grand Champion Ultralight. I’m not aware of a design snagging both honors in a single year before. (FYI: Escape Pod has been at AirVenture before but EAA judges don’t award any non-flying designs.) Hearty congratulations to Mike and right-hand man Jeremy! Now, those soaring enthusiasts — me included — are closer to deliveries of their own Pod.