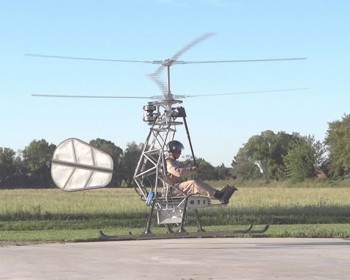 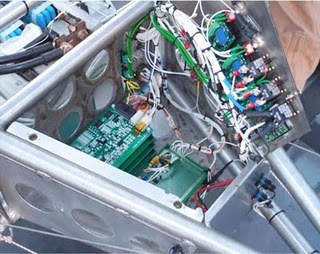 Anyone still in doubt that we’re in the midst of the birth of electric flight need look no further than this story, just posted today on the online tech zine Gizmag.Pascal Chretien, an enterprising electrical/aerospace engineer and chopper pilot, made the world’s first fully electric helicopter flight in the prototype he designed and built almost entirely by himself… in just 12 months! Hang glider and ultralight trike pilots will delight in hearing a weight shift control system is involved. *** For me, the big story here is once again we see that innovation lives, not just in megabuck corporate and government R&D departments but in the garages of individual megabrains as well…as it always has and we can expect always will.Chretien, in making his 2 minute, 10 second test eggbeater flight, threw whipped eggs in Sikorsky’s face since that aviation giant’s well-funded electric project, in development for some time now, has yet to fly. *** Gizmag quotes Chretien as he acknowledged the risks of his flight: “In case of crash I stand good chances to end up in kebab form.”Pascal, from case of your success, we pops cork of champagne pour vous! *** The article goes on to rightly point out that the electric chopper concept faces a huge hurdle when compared to winged electric aircraft because the latter doesn’t need to constantly run at higher power drain settings like helicopters do. *** Practical electric helicopters will only come to pass when batterytechnologies advance to a much higher power-to-weight storage capacity (i.e., higher energy density) than we have now, precisely because choppers do require high power for hovering, takeoff and for descent, unlike airplanes. *** Winged birds use max power for takeoff or high speed cruising, but can lope along at significantly reduced level flight power, enabling longer duration flights. That’s why we’ve seen so many motorglider-style electrics; once airborne, their highly efficient wings make possible extended flight times without much power burn. *** Still, that takes nothing away from Pascal Chretien’s achievement, (funded by the French car racing company Solution F), which is nothing short of magnificent. His super-light, super-simple chopper serves notice that electric flight as a whole is gaining global momentum across a broad range of projects. *** And once again we get a lesson in an ancient truth: the soul of invention is alive and well and knows no boundaries. *** Update later on 9/6/11 — Jim Lawrence is right about electric power coming steadily to aviation and it has its best near-term promise with the lightest end of aviation. Watch for my update on AirVenture 2011 electric ultralights and for a whole new section of ByDanJohnson.com focused entirely on electric power (the new section may arrive later in 2011). —DJ