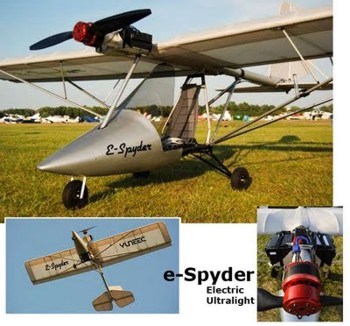 Hungry for something new about electric flight, I swapped emails with Tom Peghiny yesterday. Tom’s the majordomo of Flight Design USA (top-selling CTLS LSA) and Flightstar (longtime maker of 3-axis control ultralights.) *** e-Spyder, the electric-powered single-seat ultralight he’s developing in congress with Yuneec, the powerhouse electric aircraft manufacturer that recently opened a 250,000 sq. ft. plant in China. *** Tom filled me in on the evolution of the production prototype. Denny Franklin, the Gyro Gearloose (i.e. intuitively brilliant) engineer and designer behind venerable designs such as the Drifter ultralight, is working up a longer wing with a sheared tip. *** Equally legendary hang glider sailmaker Steve Pearson of Wills Wing (top hang glider mfg.) is making a pattern for the new wing that will use a higher-camber airfoil than the first prototype. *** Wills will make the envelopes for the e-Spyder from a laminate covering material that’s 35% lighter than the 4 oz. Dacron sailcloth traditionally used for tube-and-fabric ultralights and hang gliders. *** Weight is the key in these early days of production electric flight, so lighter 7075-T6 aluminum tubing will be used for the wing frame. *** Cured Composites is tooling up to build a new, more aerodynamic front fairing and a carbon fiber motor mount and battery box. The Yuneec electric motor will be streamlined as well. *** Can’t wait to see this next iteration. 2009 should be a great year for electrics. *** To whit: Yuneec has ordered two prototypes and a two-seater airframe from Tom to train with in China. Could a two-seat electric ultralight be just over the horizon as well? *** Stay tuned… *** —photos courtesy Flightstar