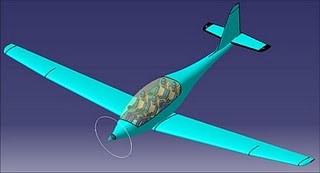 Alright, I’m succumbing to Electric Fever a bit more today, but a more-thorough reading of that excellent FlightGlobal piece I mentioned in the post below has a lengthy discussion about PC-Aero, a German firm that’s coming out with its own line of electric-powered aircraft…including a four-seater for General Aviation. *** The brains behind this effort live inside Mr. Calin Gologan, who predicts an all-electric four-seat GA airplane in the next ten years.   *** His company is debuting his first prototype, a single-seater electric dubbed Elektra One, at the European Aero show in Friedrichshafen this week. *** Apparently the tantalizing prospect of winning the $1.5 million in prize money offered by the CAFE Green Flight Challenge (in 2011) was the kicker to start Gologan down the E-Plane path. *** The Electra One will be followed by an Elektra Two (two seats) and Elektra Four (four) down the road. *** I don’t like to be pushy, but if you’re interested in what’s going on in electric flight technology, be sure and read the excellent story linked above.  It’s well-researched and has some very interesting things to share. *** And don’t forget to check out the Aero show…it’s always a playground where new technology debuts and this year will be no exception. *** Meanwhile, enjoy a couple teaser concept drawings of the Elektra One and Elektra Four, courtesy PC-Aero.