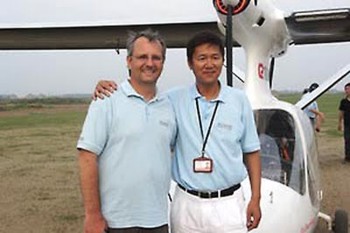 Martin Wezel, left and Tian Yu. Behind is the tandem-engine-powered E1000.

As I write an article on the current state of electric flight worldwide, sad word comes that prolific, talented German aeronautical engineer Martin Wezel has died in the crash of the prototype Yuneec International E1000 electric airplane. *** Wezel’s company, Flugzeugtechnik Wezel, was well respected for its gliders and microlights, which included the Sting and Sirius SLSA. His Apis and Viva designs were also being developed by Yuneec for electric power. The E1000 design may also have been Wezel’s. *** A new, tandem-motored four-seat design, it was being developed for market by Yuneec but also to compete in the NASA CAFE Green Flight Challenge, the $1.65 million-prize competition that’s coming up in July. *** E1000 was also entered in EAA’s upcoming Electric Aircraft Competition (Oshkosh 2011 in late July). Not evident at this point is whether another E1000 was built or will be tested. *** Details are sketchy for what was just the airplane’s second flight. Launching from Yuneec’s home airport in southern China, it suffered a catastrophic failure of the tail section at 130 feet altitude just seconds later. *** The aircraft reportedly crashed into a lake next to the runway. Wezel died two hours later at a local hospital. *** The ballistic parachute system on board may have been deployed. It likely would not have had enough altitude to completely deploy: most ballistic airframe “saves” occur at a minimum of 400 feet. *** Yuneec’s Chairman Tian Yu eulogized Wezel on the company website: *** “I, personally, feel extremely sorry to have lost Martin. He was an extremely competent collaborator and most of all a very dear friend. Martin’s passion for flying was a constant inspiration to all. My deepest sympathies and condolences to Petra, Martin’s wife, the Wezel family and all who knew and worked with Martin Wezel.” *** We echo Mr. Yu’s comments in extending our condolences to Martin Wezel’s family and friends.