The grand show called Aero in Friedrichshafen, Germany (that I’m not at… darn!) is happening at the same time as Sun ‘n Fun. Fortunately I have some reporters who offered to help and one of them is Mike Friend. Thanks to Mike, I can offer a report on an electric aircraft, at which the German show always does magnificently. His article follows. —DJ 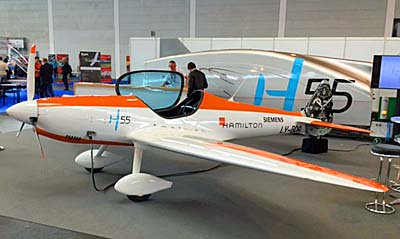 The electric Twister aerobatic aircraft is seen at Aero thanks to reporter Mike Friend.

The future looks electric. What if your love in aviation is aerobatic flying? That game is about to change.

Hangar 55, a new Swiss company, has introduced an electric version of the delightful Silence Twister with financial support from the Hamilton watch company. Equipped with a prototype Siemens electric motor of around 90 horsepower, and with Kokam battery cells from Korea, the airplane delivers 20 minutes of smooth — and quiet — aerobatics.

Pilot Nicolas Ivanov reports that after flying this airplane, everything else seems old fashioned. Battery power seems ideal for applications where endurance is not required, at least until the next generation of batteries becomes available. Hangar 55 has a goal to use the electric Twister this year in the Red Bull Air Race as an exhibition.

They speculate that this may be a prelude to an all-electric junior class with all pilots using identical Twisters. The gasoline powered Twister has a proven track record in Europe with Pete Wells and his Twister Duo display team. The electric version seems poised to usher in a new era of ecologically friendly air show displays.

Thanks, Mike. You just never know what you’ll see at Aero and I’m so pleased to have extra reporting while I rush around Sun ‘n Fun gathering all manner of stories here.