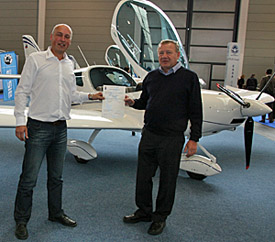 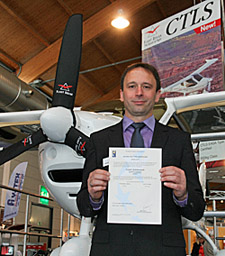 On Day 1 of Aero 2012, Dave Unwin reported hearing many comments about EASA’s halting move toward acceptance of the concept of SP/LSA, which was invented in the USA. The European Union, with an equally proud heritage of aviation, is showing familiar reluctance to embrace what another country has achieved, even when aircraft builders in the EU seek a one-for-one alignment of the rules so that aircraft certified in one country can be sold in another… as happens now with (most) European airplanes being accepted in the USA. *** While the slow-motion drama continues to unfold, EASA is moving ahead with its DOA/POA/TC approach requiring Design and Production Organization approval and a Type Certificate. *** Some companies have seen that a faster way to enlarging their market is to accept EASA’s more burdensome method. They sought to meet the DOA/POA/TC requirements and on Day 1 at Aero, the first two type certificates were awarded. *** Czech Sport Aircraft, builder of the SportCruiser (formerly and temporarily known as the PiperSport) was awarded their TC on April 16th, followed immediately by Flight Design on April 17th. *** Congratulations to both companies for succeeding in the pursuit of EASA approval. *** From the German airshow, Jan Fridrich of LAMA Europe wrote, “Yesterday, the long awaited event happened. EASA issued first two RTC certificates. SportCruiser (listed as the “PS-28 Cruiser”) from Czech Sport Aircraft received first ever RTC from EASA followed quickly by the “CTLS-ELA” from Flight Design. Both were handed over during the opening day of Aero 2012 on April 19th.” *** Flight Design announced the new approval in their press conference, “We are very proud to announce that Flight Design was granted Restricted Type Certification (R)TC for the CTLS. This was a very large and challenging process and a high bar to clear for Flight Design but the goal has now been achieved and the result will be very beneficial for both the company and our customers. With the (R)TC, the CTLS will now be allowed to be used more extensively in flight training, charter and other roles, measurably increasing revenue and the value of the (R)TC CTLS.” *** The news from Aero will continue over the next days.