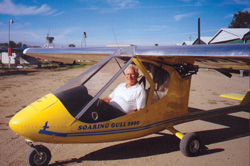 Bob Chase shows off his new Soaring Gull 2000, successor to the earlier J-series Soaring Gull. Israeli producer Avicom — who will build SLSA versions of Odyssey and Gull 2000 — could also make the motorglider version. See my article in the April 2006 Kitplanes.

An old friend just brought home an airplane I’ve long admired. Bob Chase of California’s Perris Valley airport is the proud new owner of Soaring Gull 2000 No. 1 from Earthstar Aircraft designer Mark Beierle. Though its wingspan is only 28 feet (think: easy storage), Soaring Gull 2000 manages a 16:1 glide that will assure you can stay aloft on most days with decent thermal or ridge lift. The Gull 2000 single seater fuselage is fitted with a wing two bays (~ 2 ft.) longer than Earthstar’s two seat Odyssey. Because the airplane is small and efficient, the 133 square foot wing has plenty of area; she is said to soar quite well. My favorite old Cloud Dancer had 16:1 performance (on 40-ft. wings of the same area); I managed two hours engine off for every powered hour. I loved soaring it and I look forward to accepting Bob’s offer to fly his.