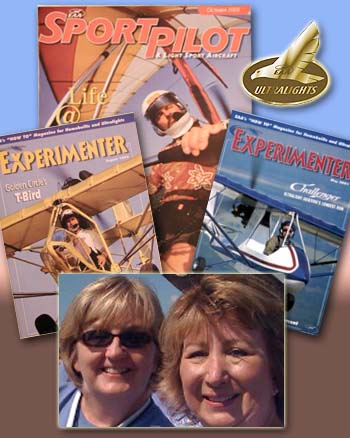 As EAA published the last issue of Sport Pilot — earlier iterations were called Ultralight, Experimenter and Light Plane World — editor Mary Jones (left) earns our kudos for a job well done. She is pictured at AirVenture 2009 with Sue Gardner, the FAA person perhaps most responsible for the Sport Pilot/Light-Sport Aircraft program.

Before you clicked to ByDanJohnson.com, you may have been reading EAA’s Sport Pilot magazine. If your copy was the December 2009 issue, it the final edition of the magazine that started with the Sport Pilot movement. *** EAA surveyed to ask what members wanted from their publications. The organization dutifully recorded all responses and chose to make a dramatic decision. They elected to stop Sport Pilot and merge the LSA title’s most popular content into their flagship rag. *** At the same time, EAA started “Light Plane World,” an eNewsletter (also online) with info about ultralights and LSA. Edited by longtime Part 103 enthusiast Dan Grunloh, LPW is intended to provide more detailed info on ultralights and light planes than space will permit in Sport Aviation. You can sign up here to get LPW… or any other EAA eNewletter. *** As this chapter closes for EAA, I wish to bring special attention to a 25-year veteran EAA editor who was one of handful nurturing the light end of EAA’s aviation activities. A longtime friend (and my editor when I wrote for EAA), Mary Jones is current interim director of publications for EAA but she’s done much more than manage EAA’s magazines. Along with Earl Lawrence and Ron Wagner, Mary is one of a trio of EAA staffers that helped propel Light-Sport Aircraft into the limelight. All three folks deserve a hearty “Thank You!” for all they’ve done.