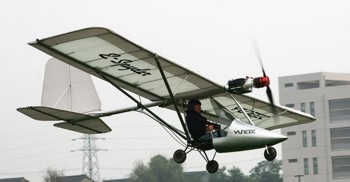 *** Everyone interested in electric flight will want to know that the E-Spyder electric-powered ultralight is poised to enter the marketplace. *** A few days ago Tom Peghiny invited me out to Woodstock, CT, about three hours drive from my house, to fly the latest prototype (v. 3) of the venerable FlightStar ultralight. *** I had to pass since I was prepping for a family visit to Germany. *** Checking in from Hamburg, I found a post on his website from my pal and LSA colleague Dan Johnson, who scooped me on the following info: *** The E-Spyder will be marketed by Yuneec, which bought the rights to produce the design from Tom and continues development on several other projects: the graceful E430 S-LSA which has won several prizes already; E-PAC power backpack for paragliders; and electric motor systems for a variety of aviation applications. *** Originally tabbed for around a $25,000 price tag, latest word is the E-Spyder will price out under $30,000. It’s a single-seater that qualified for Part 103 ultralight status. *** Dan also reports the production prototype comes with longer wings (33 ft.) and a dresser drawer-like battery tray to completely enclose the power pack in the fuselage fairing. *** Other battery notes: fewer cells but greater overall capacity, simplifying the balancing process during charging (2-2.5 hours) which is important with lithium polymer (lipo) batteries. *** Weight-reducing modifications include thinner-wall 7075-T6 tubing, a carbon fiber sandwich fairing and a Mylar-laminate Dacron wing envelope. *** Refinements to the motor include a lower max RPM which allows it to spin a longer prop at greater torque. *** Tom wrote, “We have been flying a lot since finishing the plane in mid September.” So far Tom and team have taken 15 flights on the upgraded version. Flight testing so far has brought these numbers: a top speed of 52 mph; stall of 22 mph — you can almost run that fast!; 35mph cruise; flight duration of 20-35 minutes, less than the hour originally expected…but Dan quotes Tom as saying “We’ve been able to soar it in light thermals as it really wants to go up.” *** And since Tom’s place of business (Flight Design USA) gets its power from a company that generates 80% of it from windmill and some hydroelectric sources, you could say the E-Spyder almost literally flies on air.