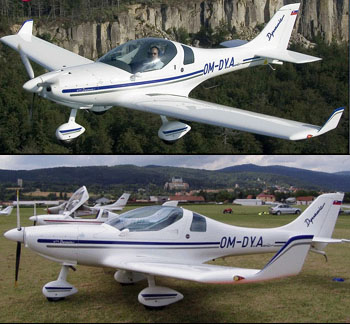 SEBRING 2008 UPDATE — Sport Aircraft Works, importer and marketer of the fast-selling SportCruiser, will announce an LSA version of their Dynamic WT9. Previously, the retractable speedster (174 mph max cruise) was only available as a kit but the Slovak designer decided to pursue American SLSA certification at 550 kg (1,212 pounds). [UPDATE: Dynamic won SLSA approval on January 8th.] *** As part of their effort to meet the standards, the Aerospool Dynamic underwent spin testing by company test pilot, Jozef Chupek. “He finished this task without any undesirable control behavior,” reported the company. Testing was done in a variety of CG load and control input configurations. “All testing situations were recoverable using normal spin recovery procedures,” Aerospool added. “Spin test flights were flown with our standard aircraft; we didn’t make any special modifications [other than] safety elements such as spin recovery parachute and ejectable cockpit.” Testing was observed by members of the Slovak Civil Aviation Authority. See the spin test video (scroll down). *** Dynamic SLSA won’t just be a slowed version of the retract model. The revised WT9 features modern winglets (photos). “With new winglets, its slow speed envelope is even more impressive,” reports Sport Aircraft Works. Check the specs and head to Sebring in 10 days and see it for yourself!