A year ago at Sun ‘n Fun 2021, I reported on a Rotax 503 replacement built in Russia. This information was warmly received at the time because the 503 powerplant was much beloved by ultralight enthusiasts. 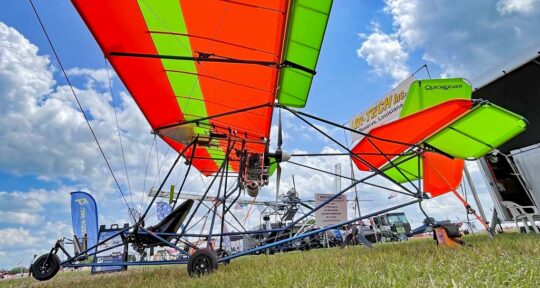 Little did we know last year that Putin would invade Ukraine and plunge both countries into disarray. The RMZ 500 engine seemed to promise a return to the popular engine. It will surely be months if not years before we see more of them.

Despite the former popularity of the Rotax 503 fifteen years ago, one of the most common questions asked of Part 103 producers today is, “Can you provide a four-stroke engine?” 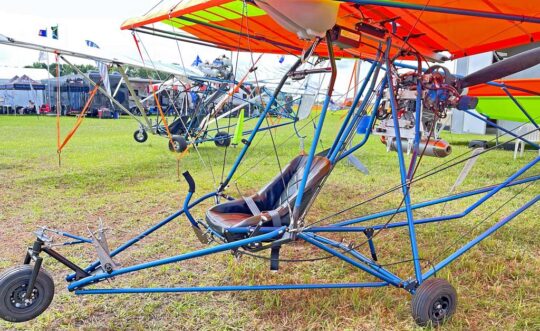 At Sun ‘n Fun 2022, Gene “Bever” Borne and son Ken of Air-Tech Inc., brought two Quicksilver models for display. One is a two seat Sport. The other a single seat, Part 103 capable Sprint.

In the Quicksilver product line, you have Sprint and Sport models; the former a single surface wing, the latter a double surface wing. Both use cable bracing for primary structures. The single surface weighs less and is less likely to break Part 103 speed limits. The Sport is a bit faster. Both models are offered in single seat or two seat varieties. For those who don’t want cable bracing Sprint 2-S and Sport 2-S are two seaters offered in strut-braced versions, hence the “S” designation.

A Sprint is most likely to make Part 103 weight but as a higher drag aircraft, it has relied on a strong enough two-stroke engine to get the full performance envelope. Rotax discontinued the twin-cylinder, 40 horsepower 447 along with the more powerful 503 in 2010.

You could hardly miss Air-Tech Inc’s airplane with its day glow orange and lime green coloration. The airplane was so bright I completely missed the engine until I returned for more… as promised in yesterday’s preview article. 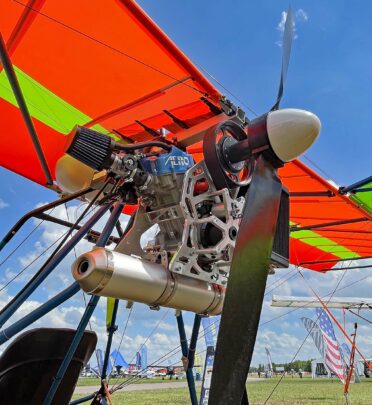 Upon closer inspection, this Sprint model was powered by Aero 1000, a single-cylinder, four-stroke engine with impressive specs. Air-Tech said it outputs 39 horsepower — similar to the Rotax 447 — and is extremely economical on fuel.

“It also has a great sound,” said Ken Borne in our video interview about the engine.

Is Aero 1000 a creation of Air-Tech, Inc., the longtime Quicksilver representative that now owns the rights? No, they didn’t originate this. That effort was done by Mike Robinson, owner and CEO of Blackhawk Paramotor USA. His powered paraglider company sells lots of “quads,” four wheel carriages for pilots who like powered paragliders but don’t want to rely on their legs for foot launching. (Blackhawk also makes foot launched models.) 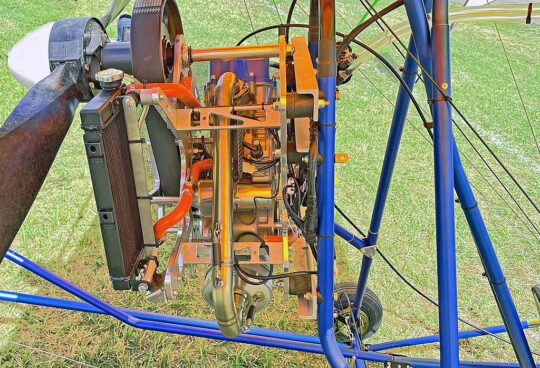 Blackhawk’s search for the right engine for their quads lead them to an Swiss engine popular with cart racing enthusiasts. These racers push the engines hard and after years of working to improve the breed, the base engine has become very reliable.

Blackhawk later created a mount construction for the engine to be used on their quads.

Bever and Ken noticed this development at AirVenture Oshkosh where the two companies have side-by-side display spaces. They got to talking as vendors do at airshows. After Mike said some of his paraglider customers wanted to investigate fixed wing flying, Bever and Mike struck an agreement to try out the Blackhawk configuration on their Quicksilver line.

Bever said the final installed weight of the Aero 1000 with reduction drive and exhaust and all other components is about 15 pounds more than the Rotax 447 with its driveshaft and other hardware. Most pilots will readily give up 15 pounds of useful load to have four-stroke reliability and reduced noise. 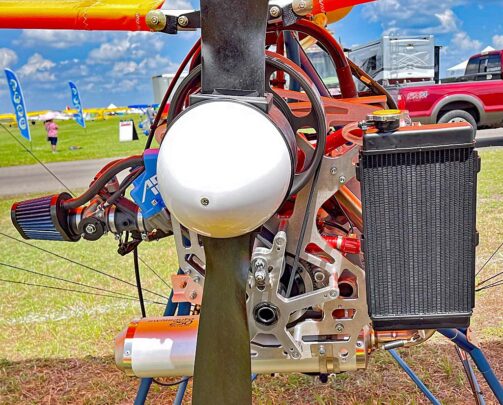 Bever and Ken have fitted the Aero 1000 to their Sprint after building fairly simple hardware to support the engine — see nearby photos of engine and mounts.

When I asked if this particular aircraft with the Aero 1000 powering it honestly stays within Part 103 limits, Ken responded without hesitation, “Yes, it does.”

While Air-Tech conducts flight testing of the Sprint with Aero 1000, get more information on the engine from Blackhawk.

Air-Tech and their collaboration with Blackhawk may have hit a beautiful note with Aero 1000. Contact Air-Tech to inquire further.

Quicksilver models run $23,500 for a complete (and very quick assembly) kit with engine (single seat Sprint) to $28,830 for a larger strut braced kit (two seat Sport 2-S). In 2022, these models practically define “affordable.” Pricing has not yet been established for Aero 1000 on Quicksilver.