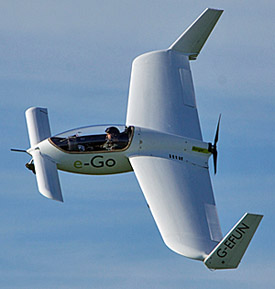 e-Go performs on a early flight in late October. all photos by David Boughey (davidboughey.com)

In the last days of October, another fascinating UK light aircraft took to the air after several years in development. The brainchild of Giotto Castelli and Tony Bishop takes advantage of SSDR, a British CAA initiative with the longer name of “Single Seat Deregulation,” proving as has the LSA movement that reduced government control allows innovation to blossom. The British program allows aircraft weighing less than 115 kilograms to bypass conventional certification.

A test pilot took the canard design up for its first official flight recently logging about 30 minutes up to 4,000 feet and 80 knots to conduct initial handling trials. After a post-flight inspection, data analysis, and refueling, he took it up again for its second, one hour flight to explore the envelope further, including stability, control and canard stalls. Then on October 30th, with notoriously difficult UK weather still cooperating, former BAE Systems chief test pilot Keith Dennison demonstrated e-Go to an invited audience of customers, investors, volunteers, suppliers, friends and family at Tibenham airfield in Norfolk, England.

A few specifications for e-Go: • Empty weight 253 pounds (115 kg); • span about 26 feet; • cruise speed 100 knots/115 mph; • climb rate 900 fpm; • range 330 nm on 6.6 gallons of fuel capacity; • glide angle 16:1; • takeoff and landing roll about 500 feet. A single seater, e-Go is powered by a Rotron wankel 30-horsepower engine that is prized for its light weight. Although e-Go meets the empty weight for U.S. Part 103, it’s too fast for that category. The company stated, “We plan to start in [America] with an experimental version, followed by LSA kits and complete aircraft.” They also hope to meet the German 120 kilogram class when that regulation is ready.

Company executive chairman Malcolm Bird — who flies a SportCruiser LSA and has built a Rotorway helicopter — commented: “The aircraft embodies many novel features and benefits from the aviation authority in the UK relaxing its regulation on very light aircraft. This has allowed e-Go aeroplanes to develop a completely new aircraft in a short time and with the minimum of red tape. It is good to be involved in the revival of a British aviation industry.” The company reported that interest in the product is high and they have received first deposits for aircraft which will be delivered in 2015.

Design originator Giotto Castelli, who has worked at Pilatus among other companies, described his vision for the aircraft, “I believe the canard design (small front wing) can offer great maneuverability and efficient aerodynamics. The e-Go adds to that an impressive field of view and a very compact airframe with simple lines which the air likes as much as the eye does. This also allows the weight to be kept to an absolute minimum. It is amazing to have had so many individuals and companies supporting this seemingly infectious project.” More details, specs, photos, and video are available on the e-Go website.

Catch a video of e-Go in demonstration flying …