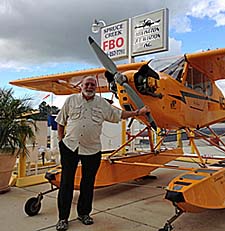 Ron Bishop of Ventus LLC poses with his AmphibCub. 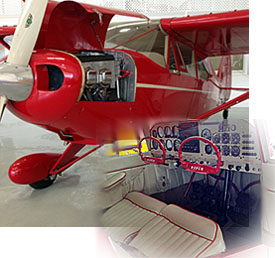 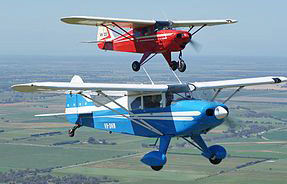 Piper’s original Pacer and Tri-Pacer sold well in the 1950s.

On a lovely day recently at my home airflield — Spruce Creek Fly-in — local Cub afficianado Ron Bishop assembled quite a few of American Legend’s handsome yellow Cub lookalikes. The affair, complete with the requisite hot dog lunch attracted about 200 visitors said Ron. They saw more than Cubs as a SeaRey, a CTsw and a Jabiru also joined the party. All were available for a closer look.

Ron Bishop is representing the American Legend Cub line and displayed an example of almost every one, from the Super Legend out front (more on that in a minute), several Cubs on wheels, and the one Ron has been flying regularly around Spruce Creek, the AmphibCub. The outing was an occasion for potential buyers to select a Cub of their choice and Ron reported two did just that. They’ll be smiling and so was Ron. Calling his new LSA company Ventus LLC (Greek for “wind”), Bishop will quarter his enterprise with longtime Spruce Creek FBO Yelvington Jet Aviation.

Ron reported that the Super Legend is now about to enter production and should be available as the new year arrives. Super Legend is powered by the potent Lycoming O-233 engine (video) and that should make it a lively performer, especially when fitted with floats. The O-233 has 115 horsepower on the standard LSA version, features electronic ignition, and is a multi-fuel engine meaning it can use mogas (even with 10% ethanol), avgas, or a mixture… much like the Rotax is able to do. All this means when you float up to the marina, you can likely fuel up and not have to seek out an airport. The O-233 is now only a few pounds heavier than the more commonly used Continental O-200, which is why American Legend has been able to adapt the American-made powerplant. To assure Super Legend stays within the LSA weight parameters, carbon fiber has been used in many areas of the airplane. Get more details on our video.

All that effort to accommodate Lycoming and to lighten the airplane will come into good use when American Legend sets out on a new project that Ron Bishop revealed at his event.

The fresh news I uncovered is a plan to make a replica edition of Piper Aircraft’s popular Pacer. The Florida company made their four-place PA-20 Pacer and PA-22 Tri-Pacer models in the post-World War II period. After the nose dragger model came out it outsold the taildragging Pacer six to one; more than 8,000 Tri-Pacers were produced between 1953 and 1960. Ron indicated that Legend boss Darin Hart is already at work on the Pacer variation, albeit with only two seats to qualify as a Light-Sport. That change and the addition of carbon fiber cowling and wheel pants plus other weight savings should help the Texas producer keep their version of the Pacer lean and lively. They plan to use the 115-horsepower, 2,400-hour TBO Lycoming O-233 just as on the Super Legend. Ron said he hoped they could complete the project by end of summer 2013.