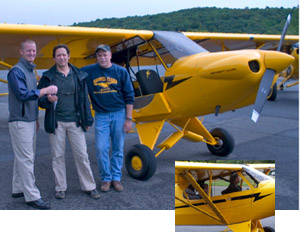 Their entry has taken longer than two preceding sellers of Cub replicas under the LSA rules, but CubCrafters has taken the time to get it just right. On Thursday September 21st, the Yakima, Washington-based builder of the Part 23-certified Top Cub delivered its first two CC11-100 Sport Cub SLSA to customers from opposite coasts and starkly different environments. One will go to Juneau, Alaska and the other to Brooklyn, New York. Company president Jim Richmond thanked customers and employees who “worked and waited with us so patiently while we completely redesigned the airplane.” The company announced that deliveries will now take place at the rate of one per week, increasing to two per week near the turn of the year. *** The other two suppliers of LSA Cub replicas are North American Sport Aviation and American Legend; the latter will host a homecoming for 100 customers and prospects in the third week of October.