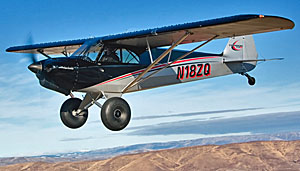 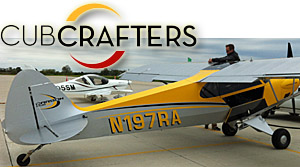 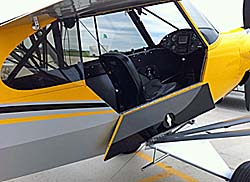 You can fly Carbon Cub SS with one window open, including the door if you like. 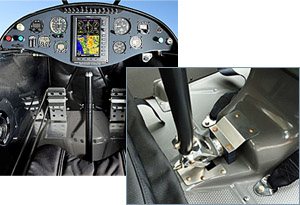 Finish quality and components are excellent on Carbon Cub SS.

The Heart of America Sport Aviation Classic is history. Weather and first year challenges conspired to keep the event from achieving its true potential, which illustrates the task of creating a “new Sebring” LSA Expo. These small venues have outsize appeal because they are much more intimate than the big airshows with their tens or hundreds of thousands of attendees. You can talk at length with aircraft sellers and taking a demo flight is… well, it’s practically the whole point. So we did.

We were able to perform a full video pilot report on the CubCrafters Carbon Cub SS. Update 10/9/12; video appears below — The west coast company’s popular model with a potent 180-horsepower engine leaps off the runway with such enthusiasm it can appear a visual trick. Both my videographer and I had a chance to fly with CubCrafters dealer and Rare Aircraft vintage aircraft restoration partner, Ben Redman. We logged in-flight video, ground video, and did a video recap at the end with Dave and I comparing thoughts. Here is the essence of what we discovered.

Right off the bat, takeoff behind 180 horses is a hoot! If you’ve seen a demo, what you see is pretty much what you get except that in the pilot’s seat it’s even more fun. CubCrafters has performed well in climbing our market share chart and the sheer power of this LSA has to be one of the main reasons. Ben advised I add in full power smoothly. You instantly roar down the runway. Dave found you hardly need to lift the tail — a normal taildragger technique — as the power does it for you. I did lift the tail, but almost in one motion, I then began to pull back on the joystick and it is literally a second or two before the mains are leaving the ground. We climbed like a SpaceX rocket and clocked more than a thousand feet before reaching the end of the runway.

Once aloft, Ben suggested we throttle back to about 1700 rpm where we could pretend we were in an authentic (meaning 60-year-old) Cub, putt-putting along at about 60 mph. It was quite pleasant. You can open either window, though the Pilots Operating Handbook says not both at once. Ben prefers to open the right window plus the door. Had it been a warm summer day, I definitely would have given this a try.

Though it can act like a old Piper Cub, it certainly is not one. You can have a digital panel if you wish. You have all the amenities of any modern airplane. Plus, the interior finish of the Carbon Cub SS is exquisite. As its name implies, carbon fiber has been widely used to restrain the weight of this largish airplane to stay within the LSA parameters. Of course, you pay for the company’s effort to hold weight down while giving you the goodies. Carbon Cub SS starts at $173,000 and I’m told plenty of them hit or break $200 grand. That’s a lot of dough for an LSA but you do get a remarkably well finished and equipped aircraft.

Handling was pleasant with a need to use the rudder pedals lightly and the joystick a bit more assertively. My early dutch rolls were a tad sloppy but improved quickly. Stalls were very mild, with an audible horn and a muted drop of the nose. Recovery was very quick. Steeps turns usually require a touch of power and in Carbon Cub SS, “a touch” is literal; I made a tiny movement of the nearby throttle to find myself climbing 500 fpm. Still, it’s easy to get used to this much power.

My three-point landing went very well with Carbon Cub SS staying planted firmly (assuming you’ve kept your speed below 60 mph at touchdown). On the taxi back, I found I could see over the nose easily from the front seat, though from the rear, Dave said you have to fishtail back and forth. Shorter folks will find this a bit challenging but normally you’ll solo up front. We’ll relate more on the video pilot report that appears below and on our LSA Video page.