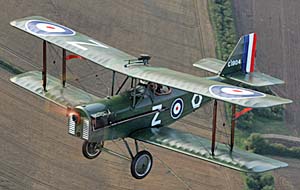 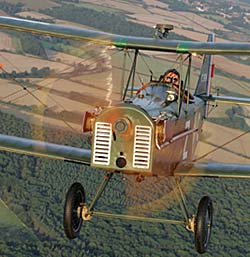 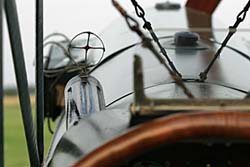 In this retro installment, Dave Unwin reviews an 85% WWI fighter. Dave will soon start reporting from the German Aero show. —DJ ||||
Watching the world drift by under a pair of sturdy, wire-braced wings is particularly special. Wind wails in the wires and the engine growls contentedly. Nearly one hundred years after the “Big War,” I flew a scale replica of one of the most famous fighters of that era: the iconic SE5a. *** Looking remarkably realistic from a distance, I drew nearer wondering if the similarities were only skin (fabric?) deep. Knowing the basic data of a full-scale SE, I was surprised when a quick calculation on the back of my kneeboard revealed my ship known as “Z” actually has a better power-to-weight ratio than a real SE5a! It also has a higher wing loading. *** Z is painted to resemble the personal aircraft of one of the war’s top-scoring aces, Major W. A. ‘Billy’ Bishop. Z carefully replicates the experience of operating a WWI fighter and this is especially true regarding ground handling. I appreciated a wing-walker to help me during taxi. The view immediately forward is not that good and the brakes are weak. *** Lining up precisely in the center of the turf runway I fully opened the throttle. For the initial part of the take off run you’re quite blind. Z’s acceleration is excellent and the tail can be raised almost immediately. Now I could see. *** Z rushes wide-winged into the wind like a true thoroughbred and after a run of 500 feet lift-off occurs at around 40 knots. Best rate of climb is about 55, although there is no point in chasing the airspeed. The best way to fly aircraft such as Z, which has a very low wing loading, is simply to maintain the optimum pitch attitude and accept the speed and climb rate that this produces (about 800 fpm). *** Z is loud though the small windscreen is surprisingly efficient. As long as your turns are well coordinated little air enters the cockpit. As for visibility in flight… well, it’s a biplane, with all the configuration’s deficiencies. *** However, Z’s controls are powerful and crisp, and the engine responsive, while the fine pitch prop and myriad struts and wires produce plenty of drag. Slow flight is fairly benign, and the aircraft stalls somewhere around 37 knots. Cruising at 70 knots, with the rays of the setting sun streaming through the struts evokes a true WWI experience. With the air racing past the cockpit and the raucous roar of the engine ringing in my ears I could easily imagine myself flying back to base after a scrap with the fiendish Hun. *** The light had taken on the wonderfully sublime quality that you often get in the hour before sunset. The wings fairly glowed in the soft, suffused sunlight and flying over Grimsthorpe Castle gave the whole experience a feeling of timelessness. The experience was so real, I tended to nervously check my “six” to make sure some Fokker wasn’t sneaking up on me! *** In the circuit I found that the classic curved glide approach technique all the way round from the end of the downwind leg to short finals worked best. As I crossed the fence I chopped the power, flared, and Z softly sat down. With the tailskid digging into the ground and my feet dancing on the rudder pedals it tracked dead straight, although I could feel through my seat that it would cheerfully ground loop if I let it. Just like a real SE, Z prefers landing at a “field for aeroplanes” rather than an airfield. In WWI most military air bases were large, approximately circular grass fields. Consequently, you always landed directly into wind and Z prefers this treatment. I would rather land in a field next to an airport than chance landing Z on Tarmac in a crosswind. [Watch for more from Dave Unwin starting April 18th. —DJ]