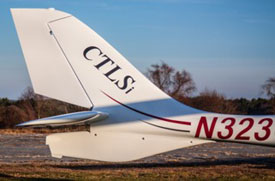 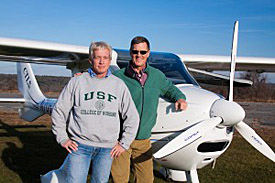 Jonathan Carter (with Tom Peghiny, rt) took time out to let me try out the CTLSi just before his flight to Florida to deliver the airplane to a new customer – a 4-person partnership at Spruce Creek Airport. 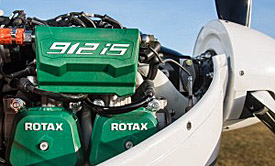 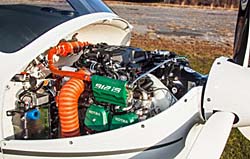 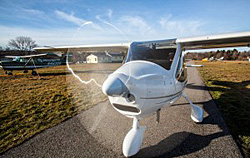 Not just another pretty face.

Yes, as the pics show, I did indeed take advantage of a rare, calm, beautiful, warm (for winter) day in New England to drive over to Tom Peghiny‘s Flight Design USA and take my first hop in a fuel-injected Rotax-powered LSA: the new CTLSi. Company Chief Pilot Jonathan Carter did me the honors as we went for a spin the last hour of the clear-sky, gorgeous day: no bumps, no ATC to deal with, just that good smooth, strong CT climb up and away from the company’s little paved strip in Woodstock, Connecticut.

CTLSi, latest version of the industry-leading CT line (the company’s been at the front of the pack for 7 years), is noteworthy primarily for its new powerplant, which dramatically improves fuel economy, starts easier, and runs smoother. I’ll have a full flight report on the airplane in the spring issue of the magazine. But I don’t want to wait to say that for me, this is a wonderfully refined airplane and a real step forward from the version I flew four years ago when I got my Sport Pilot rating with instructor rock ‘n rollin’ CFI John Lampson (he moonlights with a popular rock band, Stealing Jupiter, in the Northeast). That early all-composite entry into the U.S. market had wonderful high-speed cruise performance, was very comfortable, had good visibility, and was beautifully crafted by the German company that produces it (more than a thousand now delivered worldwide, with a four-seat version that should see production within the next year or two.)

None of those accolades have gone away. If anything, the CTLSi is even more refined in fit and finish, but for me, the real difference, and decided pleasure, was how beautifully it flies. The stick and rudder forces are firm-ish but response is really just the way I like it: neither too twitchy not stiff or sluggish. Pitch and roll forces are beautifully harmonized. The rudder still likes a good push climbing out or in a low-power descent (right or left foot accordingly). I flew it a bit like I fly the J3 Cub, leading in with a strong push of the foot. CTLSi responds with a right-now, smooth and solid wing drop, the nose tracks right into the turn and around you go, with excellent viz through the topnotch window which is big enough and well placed enough to give you an excellent feeling of security looking up and into your turn, in even a 30 degree bank.

Another, much-welcomed addition is the electric pitch trim rocker switch where the old mechanical trim wheel used to be. It works like a treat, I love it. I made two perfectly fine landings, one a greaser, one, as the burnt amber winter light waned at Flight Design’s narrow strip, with just a touch of a drop-on from a foot-early flare. These were my first touchdowns in a CT in years (except one on floats on the water two years ago at Sebring) and I have to say they were a piece of cake. The CT feels like a fully friendly airplane to me, whereas in earlier versions I felt like I had to wrestle with it a bit, partly because of my lack of flight time, partly because the control mechanics hadn’t been optimized to suit my liking.

Even the cockpit sight picture, which used to give me fits because of the curve of the cowl and the stubby puppy-dog nose, presented no problem. Where I would tend to think I was pointed down the runway when I was in fact 20 degrees off, resulting in a side-load touchdown tendency, it seemed easier with the new airplane to hold the line during both takeoff and landing. Tom P. says it’s because I’ve got more time in a bunch of LSA. Undoubtedly that’s true.

But in any case, this is not your erstwhile older brother’s CT. The CTLSi is a lovely, fully-realized airplane that makes the most of the category: comfort, handling, performance, quality and economy. I’m really happy I had a chance to rekindle my affection for the CT, and didn’t want to wait to share that with you.