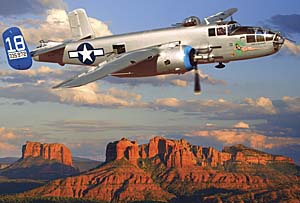 The name Copperstate becomes clear with this beautiful photo of a B-25 near Sedona, Arizona. all photos courtesy Copperstate Fly-In, Inc. 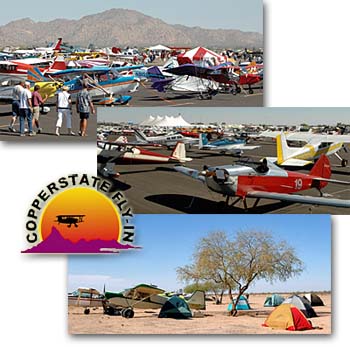 During my recent appearance on the Powered Sport Flying (Internet) Radio Show, I said I remained amazed that although the western U.S. has a large share of all pilots and airplanes in the country, no western airshow seems to have taken off the way Sun ‘n Fun or AirVenture has. True enough, no west-of-the-Mississippi event comes close in size to the eastern shows, but my comments weren’t fair to steady work by organizers of Copperstate, an event with a 37-year history (nor to the even-larger and older Arlington show or the Golden West event.) These western shows may not be huge, but they reveal an aviation passion. *** This year’s Copperstate will be held in Casa Grande, Arizona — just south of Phoenix — from Thursday, October 21st through Saturday, October 23rd. The 2009 edition reported “more than 6,500 attendees.” I spoke with new LSA enthusiast Steve Bass, Copperstate Fly-In Vice President and Light Sport & Ultralight Committee Chairman. He told me, “Though I have flown Pipers, Cessnas and owned a Beech, I have always had a fascination with weight-shift trikes.  About a year and a half ago I took trike flight instruction and purchased a used trike, which is now based in a hanger at the Chandler, Arizona airport.” *** The southwestern show has long had a focus on the light end of aviation but it needed fresh leadership. “Copperstate wanted me to come in and breathe some life back into their Ultralight segment and they were, of course, including Light Sport Aircraft in that description,” explained Steve. *** Copperstate 2010 expects 50 commercial exhibitors will showcase the latest aviation products. They forecast more than 350 aircraft, 200 of which will be show planes vying for awards. Steve finished, “The Copperstate Fly-In is recreational aviation at its best — powered parachutes, ultralights, Light-Sport, experimental, certified, classic, vintage and warbirds.” Aircraft demonstration flights and helicopter rides will take place daily. In addition, they’ll produce more than 70 educational forums and from my visits to this event, southern Arizona’s weather is close to perfection in late October.