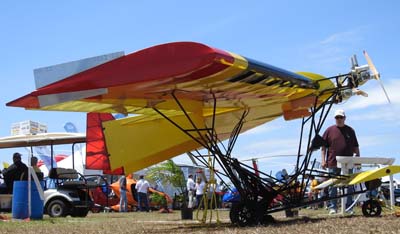 Videoman Dave first pulled me aside to look at an unusual ultralight aircraft nestled in the homebuilt area hidden behind a row of porta-potties. It was a questionable (but, surprisingly not stinky) location for what I had to admit was one truly fascinating aircraft. Check out Lightning Bug!

Sun ‘n Fun Paradise City volunteers and officials evidently agreed that Lightning Bug was too fun and too novel to be sequestered behind the biffies. Out it came to a prominent position right in front of the area headquarters tent. In this central spot, this sweet little flying creation steadily drew a crowd.

I missed seeing Lightning Bug take to the air on Friday, April 7th, but I was told it looked good. This despite fairly strong winds that crossed the runway at angles approaching 90 degrees. Other light aircraft managed to fly normally so why does this surprise me? 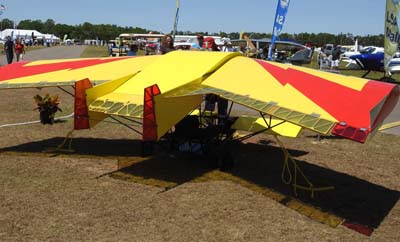 One look at the photos ought to explain but what you can’t see is that Lightning Bug weighs a mere 140 pounds and employs unorthodox control surfaces. I don’t think I’ve ever seen a three axis flying machine, ‘er… ultralight vehicle that comes in an amazing 114 pounds under the tight weight limit of Part 103.

The work of Brian Austein, Lighting Bug is not planned as a product. Brian grew up flying model aircraft, radio control airplanes. He wanted to see if he could make a low-cost aircraft that could be powered by twin engines that are tiny compared to most ultralights but very large for a radio-controls model. Some years ago RC models with spans of a few inches to a 3-4 feet went fully electric. Larger ones, up to 50% scale said Brian, use the engines he mounted on Lightning Bug.

His investment, not counting the value of his time: about $3,000, $1,000 for each engine and $1,000 for his novel airframe that uses elevons and other moveable surfaces you simply don’t see on, well… “normal” aircraft. I was completely impressed not only by the extreme creativity in assembling an aircraft with looks unique to any I’ve ever seen, but to Brian’s thoughtful consideration and by the quality of the workmanship. 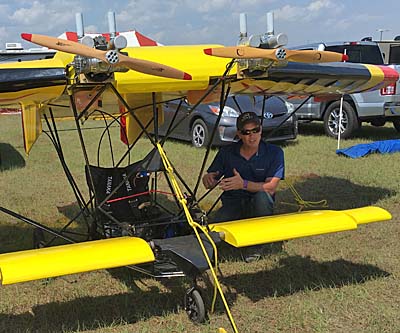 A variety of materials were used to build this head-turning aircraft. Welded steel provides the basic structure with foam core and aluminum spar wings. Control surfaces are covered with see-through monokote as you’d find on many model aircraft, again hewing to Brian’s background.

Lightning Bug has a tiny 19.5-foot span comprised of two eight foot wings and a 3.5-foot center section. The canard up front allows Brian to rotate off the ground more controllably but when he says it “Will Not Stall,” he does not refer to the canard preventing a break.

On top of everything else about this awesome, singular product, it is equipped with “auto pilot.” Is your head starting to spin? Mine sure was.

A couple years ago, Brian developed the Woodpecker and proceeded to win several awards at Oshkosh, he reported. That machine was not sold either showing this is a fascination for achieving super-affordable and novel aircraft that meld full-scale, man-carrying aircraft to techniques employed in assembling RC aircraft. From the constant attention Lightning Bug generated, it is obvious I was not the only one wowed by this young man’s design prowess and his unconventional approach. Bravo, Brian!

Fortunately, Brian consented to a video interview so you will get a fuller story after Videoman Dave gets the editing done.