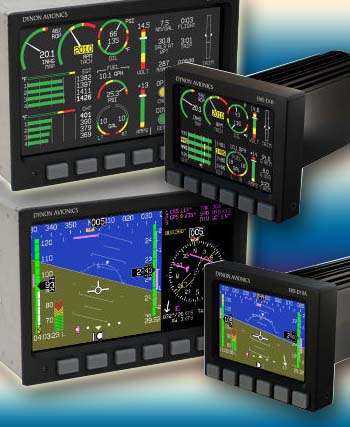 Many website visitors ask about LSA avionics leadership. Indeed, ever since “steam gauges” gave way to glass screens, the players have changed. Analog instruments were made by many companies and became such commodities that you may not be able to name a brand. But as computers entered our cockpits, first via GPS and later with multi-function displays, brands became better known. *** For this mini-report, I’ll divide the new players into two groups: EFIS/EMS providers and GPS/radio providers. A third group will include autopilot builders and even newer gear like night vision systems. As I make some guesstimates about market shares, I acknowledge this is non-scientific. If you believe you have better information, please forward your comments. *** Among fully-built SLSA, it appears Dynon has the lion’s share of the digital instrument market (photo). They admit their biggest competitor remains analog gauges but in “glass cockpits,” the Washington state company appears to have the lead — estimated at 50-75%. Two top manufacturers, Flight Design and Remos, use only Dynon. In the Experimental (EAB) market, Dynon is the probable leader though they have competitors such as Grand Rapids Technology, Advanced Flight Systems, Blue Mountain, and MGL Avionics…each of which also has installations in SLSA. One educated guess is that Dynon has half the EAB digital market, where GRT and AFS have another sixth each and Blue Mountain and MGL have something less than 10% each.